Scarlet in the Snow - Sophie Masson 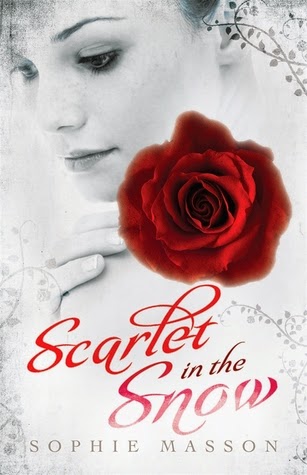 When Natasha is forced to shelter from a blizzard, she is lucky to see a mansion looming out of the snow. Inside, it is beautiful - except, instead of paintings, there are empty frames on every wall. In the snowy garden, she finds one perfect red rose in bloom. Dreamily she reaches out a hand...

Only to have the terrifying master of the house appear, and demand vengeance on her for taking his rose.

So begins an extraordinary adventure that will see Natasha plunged deep into the heart of a mystery, as she realizes she has stumbled upon a powerful sorcerer's spell of revenge.

But even if she can break the spell, the Beast she has come to love will be snatched from her. Natasha will have a long journey ahead before there can be a happy ending.

Review:
I'm always up for fairy tale retellings, and Beauty and the Beast ones are my favourite. This retelling is set in an alternative-world Prague (early 20th century perhaps), where magic is known and used. I appreciated the Russian and Eastern European influences in the story, it's a nice change from the French or general Romance-era settings that dominate these stories.

The one thing I felt was lacking in this story was how quickly Natasha fell in love with the Beast/Ivan. It was almost as if she was compelled to love him through fate or magic, not that she gradually fell in love with him on her own. I really would have liked to see that part fleshed out a bit, since admittedly that's one of my favourite parts of the traditional story.

On the other hand, one thing I really did enjoy about this story was that it goes beyond where traditional Beauty and the Beast stories usually end, where the heroine professes her love and the Beast returns to human form. In Scarlet in the Snow, that's just the beginning of the story. After Natasha declares her love for the Beast/Ivan, he is spirited away by the sorcerer who originally cursed him; and it is up to Natasha to find him, uncover his true identity, and break the hold of the sorcerer. This part of the book, while unique and engaging, does drag on at points; but being able to explore the marvelous world the author has created here more than makes up for that, the details she includes are amazingly in-depth.

Recommendation:
A unique retelling of Beauty and the Beast set in a wonderful world that is painstakingly detailed.

Thoughts on the cover:
Could be better, seems fairly generic.
Posted by Andrea at 1:05 PM