Of Beast and Beauty - Stacey Jay 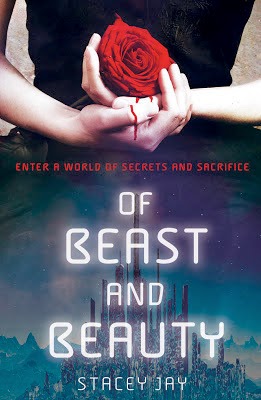 In the domed city of Yuan the blind Princess Isra, a Smooth Skin, is raised to be a human sacrifice whose death will ensure her city's vitality. In the desert outside Yuan, Gem, a mutant beast, fights to save his people, known as the Monstrous, from starvation. Neither dreams that together, they could return balance to their worlds.

Isra wants to help the city's Banished people, second-class citizens despised for possessing Monstrous traits. But after she enlists the aid of her prisoner, Gem, who has been captured while trying to steal Yuan's enchanted roses, she begins to care for him, and to question everything she has been brought up to believe.

As secrets are revealed and Isra's sight, which vanished during her childhood, returns, Isra will have to choose between duty to her people and the beast she has come to love.

Stacey Jay has reimagined the classic tale of Beauty and the Beast with a dark new twist that will enchant modern audiences.

Review:
I've read Juliet Immortal by this author and quite enjoyed it, so when I saw she had written a retelling of Beauty and the Beast, I knew I had to read it.

This is a really interesting set-up. People from different planets come to settle on a different planet and somewhere along the line while they're building domed cities to live in to escape the harsh deserts, some of their people (the Smooth Skins) lock out another group of people (the Monstrous). The group doomed to the deserts evolve and soon develop "Monstrous" traits to help them survive: thicker calloused skin, claws ala  Wolverine, etc. Because the original group became divided, the deity of that land curses both groups until a Smooth Skin and a Monstrous can learn to love one another, and their love will reunite both groups. Part of the curse for the Smooth Skins is that in order to keep the city alive, Yuan's queen must sacrifice herself and feed her blood to the magic roses once every 15-30 years. Isra's mother died when she was 4 years old, and she has always known that she is next in line to give her life for the good of her people, especially after her father's death. After Gem is captured trying to steal the magic of Yuan's roses for the good of his tribe in the desert, Isra uses him as labour to help her build a garden to help her people suffering from deformities and sickness. They begin to fall in love along the way, and both begin to question all the tales and stereotypes they've internalized about the other. When they both begin to hope for a new way to save themselves and their peoples, they question if they will be able to pull it off amidst the treachery and hate of Isra's court.

The plot has enough of a twist on the original tale to be really enticing and keep you reading, the writing is well done too, which helps. The romance is handled amazingly well, showing how they gradually fall in love versus telling the exact moment when it happens. Both Isra and Gem are really well-rounded characters, both damaged but hopeful in their unique ways. I even liked Bo, Isra's suitor, definitely not the Gaston-like character I assumed he'd been put there for.

Recommendation:
An extremely well-done retelling of Beauty and the Beast with a sci-fi twist that's really hard to put down. This is one I'm adding to my collection for sure.

Thoughts on the cover:
Considering the possibilities and potential for image to use, the cover is kind of underwhelming, so don't let the blah-ness turn you off of reading this.
Posted by Andrea at 8:42 PM