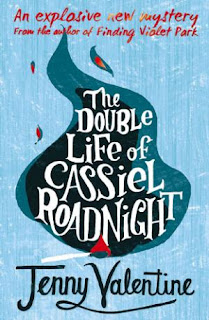 When sixteen-year-old runaway Chap is mistaken for a missing boy named Cassiel, his life changes dramatically. Chap takes on Cassiel's identity, gaining the family and friends he's always dreamed of having. But becoming someone else isn't as easy as he hoped-and Chap isn't the only one hiding a secret. As he teeters on the brink of discovery and begins to unravel the mystery behind Cassiel's disappearance, Chap realizes that he's in much deeper danger than he could have imagined.

After all, you can't just steal a life and expect to get away with it.

Award-winning author Jenny Valentine delivers an explosive mystery where dark secrets, betrayal, and loss pave the way for one teen's chance at redemption.

Review:
I'll be honest, the title is the only reason I picked up this book. In my experience, books with unique titles tend to be worth the read. Although this was a fast, simple read (in terms of style and vocabulary, the content is definitely YA territory) and it was easy to deduce how Chap fit into the whole picture, this was a decent read, nothing earth-shattering, but decent.

The story starts out with Chap staying in a halfway house for wayward youth on the streets of London. When he's mistaken for another boy after the house owners see a missing person poster, Chap admits to being Cassiel out of pure longing for a normal life and family connections. Chap is constantly on edge worrying that saying the wrong thing will result in Cassiel's family finding out the truth. He discovers that Cassiel's disappearance has inklings of foul play, and works toward figuring out what really happened, while at the same time revealing the truth behind his own childhood and the man who raised him.

I like how kind Chap is despite his life experiences, and how he doesn't pretend to be Cassiel out of malice but because he's so desperate for love and attention. It wasn't hard to figure out how Chap fits into Cassiel's family and why they look so much alike, but how his granddad fit into things was interesting to read. And the circumstances behind Cassiel's disappearance were just disturbing (nothing graphic, just shocking).

Recommendation:
A good, quick read. The mystery part isn't all that mysterious, but the ride was enjoyable nonetheless.

Thoughts on the cover:
I like the colour scheme and how the font works into the flame.
Posted by Andrea at 3:37 PM