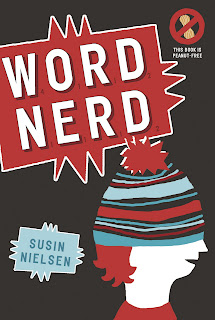 Summary:
From the publisher's website:
Twelve-year-old Ambrose is a glass-half-full kind of guy. A self-described "friendless nerd," he moves from place to place every couple of years with his overprotective mother, Irene. When some bullies at his new school almost kill him by slipping a peanut into his sandwich - even though they know he has a deathly allergy - Ambrose is philosophical. Irene, however, is not and decides that Ambrose will be home-schooled.

Alone in the evenings when Irene goes to work, Ambrose pesters Cosmo, the twenty-five-year-old son of the Greek landlords who live upstairs. Cosmo has just been released from jail for breaking and entering to support a drug habit. Quite by accident, Ambrose discovers that they share a love of Scrabble and coerces Cosmo into taking him to the West Side Scrabble Club, where Cosmo falls for Amanda, the club director. Posing as Ambrose's Big Brother to impress her, Cosmo is motivated to take Ambrose to the weekly meetings and to give him lessons in self-defense. Cosmo, Amanda, and Ambrose soon form an unlikely alliance and, for the first time in his life, Ambrose blossoms. The characters at the Scrabble Club come to embrace Ambrose for who he is and for their shared love of words. There's only one problem: Irene has no idea what Ambrose is up to.

Review:
For those that remember, this is the very same book that was mentioned a couple weeks ago in a post of mine. I figured if I was going to defend children's books from helicopter parents that want every questionable book banned from the library, I'd better read the book in question. Thankfully for me, my opinion hasn't changed since reading it; this is a wonderful little book and it's going on my to-buy list for my classroom.

Ambrose is an amazingly real character. He doesn't act like the majority of 12-year-olds out there, but for the few I've taught that aren't like other kids, Ambrose fits the bill. He gets beat up, wears clothes too small for him, and his favourite pants are purple chords. His dad died before he was born, and because of that, his mother is very overprotective of him. When he is nearly killed by school bullies when they put a peanut into his sandwich, his mom has him stay home to do correspondence school. Bored out of his mind, he recruits the help of his landlord's ex-con son, Cosmo, to drive him to a local Scrabble Club when he discovers that he and Cosmo share a love of the game.

This book deals with very real issues for kids: single parent families, bulling, finding your place in the world, and building self confidence and standing up for yourself. I like how they handled Cosmo's drug problem and the issue of him being in prison. he's very honest in his attempts to be a better person, and although kids will learn that not every person who's been in prison or done drugs will change for the better, this is a case where a second chance is Cosmo's redemption. Cosmo's street smarts contrasts against Ambrose's 12-year-old sheltered ideals of the world, and both help each other become better people. Ambrose learns not to see the worst in everyone like his mom has taught him to, and Cosmo gets a cheerleader on his journey to turn his life around.

I love all the little Canadian references. The only channel Ambrose gets on his tv is CBC, so all the names of the shows pop up frequently. There is a bit of swearing and sexual references, but nothing a real-life 12-year-old hasn't heard before, I'd give this to a kid in grade 7 and up no problem.

Recommendation:
If you were or are the weird kid in class or know a kid who is, read this! It's a cute little story of misfits finding their place in the world through Scrabble.

Thoughts on the cover:
This cover is really quirky and cute. The colours work really well with the black, and I love how they incorporated the little Scrabble points beside the letters of the title. The peanut-free logo is a nice touch as well. Love the image of Ambrose in his pom-pom hat.
Posted by Andrea at 9:13 AM