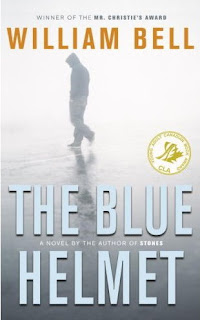 Summary:
From the back cover:
Lee wants to be a Tarantula - a member of the biggest, most powerful gang in his neighbourhood. But when his initiation goes wrong and the police catch him robbing an auto supply store, Lee's father sends him to live with his aunt in New Toronto.

Lee feels more lost than ever. His mother's death from cancer, and his father's constant absence working two jobs mean he has practically had to raise himself. But though he initially resists his Aunt Reena and the customers of Reena's Unique Café - a ragtag collection of the unusual, the unkempt and the deeply eccentric - Lee gradually learns to open himself up to his new surroundings. When Lee strikes up an unlikely friendship he is suddenly confronted by the ravages of violence, and is forced to face the consequences of his own aggression.

Review:
I picked this up the other day because the grade 9 applied English class I was teaching the other day was reading this and it looked pretty good. Plus it's by a Canadian author and was a White Pine nominee (my theory that anything nominated for a Forest of Reading category has got to be more than decent). The book is a very quick read because the plot moves along nicely after the first few chapters once Lee begins his exploits at his aunt's cafe. It didn't hit me till I was more than halfway through the book, but I could've sworn I'd read a book very similar to this before: Eric Walters' "Shattered". Both books open up with a boy in trouble who's forced into service of some kind to make up for his actions, and through that service he comes into contact with a down-and-out male figure who was a Canadian UN peacekeeper in the past. Aside from the circumstances of the main characters, where the peacekeepers were stationed, and fact that Lee's interactions with Cutter serve a purpose other than simply education (like in Walters' Shattered), the two novels could be identical. With that in mind, I still liked this novel, partly because Lee grows up in Hamilton before coming to New Toronto (yay Hamilton!), and that the revelation/message came right at the end and though it was laid on pretty thick at one point (it is a YA novel after all), the author didn't dwell on it to the point of annoyance. The significance of the blue helmet itself didn't make itself clear until very close to the end of the book, but when it did, the author managed to create the wonderful theme of 'choosing the green helmet or the green helmet'.

In terms of characters, Lee is your typical teenage boy with very understandable issues. Cutter is completely paranoid and probably slightly demented, but his antics aren't laughable, they just make you feel sorry for him. Even Lee's dad is nicely developed with his actions towards Lee's mother at the end of her life. The kids in the English class seemed to like this book well enough, and Lee probably helps in this; he's very normal, right down to the passive aggressive back-talk.

The book could serve two purposes in classrooms at least: teaching kids to be the better person and not resort to violence in their own lives, and to dispel the illusions and show the horrors of war (similarly to how "All Quiet on the Western Front" is used in classrooms now). The Blue Helmet serves both equally, with the 'horrors of war' coming in towards the end.

Recommendation:
If you have a reluctant reader (especially a boy), or just want to use this book as an excuse for some prime teaching moments, read this!

Thoughts on the cover:
The cover is kinda blah: Lee walking across the street with his face covered, the wet road reflecting him.
Posted by Andrea at 4:37 PM