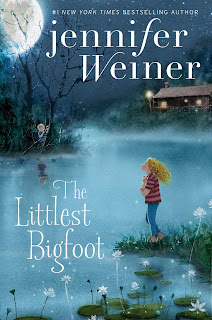 Alice Mayfair, twelve years old, slips through the world unseen and unnoticed. Ignored by her family and shipped off to her eighth boarding school, Alice would like a friend. And when she rescues Millie Maximus from drowning in a lake on night, she finds one.

But Millie is a Bigfoot, part of a clan who dwells deep in the woods. Most Bigfoots believe that people-No-Furs, as they call them-are dangerous, yet Millie is fascinated by the No-Fur world. She is convinced that humans will appreciate all the things about her that her Bigfoot tribe does not: her fearless nature, her lovely singing voice, and her desire to be a star.

Alice swears to protect Millie's secret. But a league of Bigfoot hunters is on their trail, led by a lonely kid named Jeremy. And in order to survive, Alice and Millie have to put their trust in each other-and have faith in themselves-above all else.

Brimming with equal parts humour and heartbreak, The Littlest Bigfoot is an irresistible adventure about friendship, furry creatures, and finding the place where you belong.

Review:
This book has been getting a fair bit of hype, so I wanted to see what the fuss was about. Plus, how can you turn down a book about Bigfoot?

Alice is an outcast, ignored by her parents and shipped off to countless boarding schools in and around her home in New York City, and bullied by her classmates at nearly every school she's been to. For grade seven, her parents hope that The Experimental Center for Love and Learning in upstate New York will be different, that Alice will magically become less clumsy, lose weight, make friends, and be a daughter they can be proud of. Although Alice would love to be smaller and make her hair less wild, she really just wants a friend. Millie is the smallest Bigfoot in her Yare tribe, living deep in the woods across the lake from Alice's school. She has straight, silver fur when everyone else's is dark and curly, loves to sing, and isn't afraid of the No-Furs like she should be. Both girls are unappreciated by their families and communities, and yearn to find a place where they can be accepted as themselves. When Alice and Millie unexpectedly meet one night, both girls get the friend they long for that accepts them for who they are, but when the Yare tribe is threatened with exposure, both girls come together to preserve Millie's community.

The book alternates perspectives from one chapter to the next, switching from Alice to Millie, and occasionally including Jeremy, the boy who accidentally exposes the Yare tribe in his quest to uncover the truth about Bigfoot. Adding Jeremy was an interesting addition, but there's only a couple chapters from his perspective, so it's a little jarring hearing from Alice and Millie and randomly hearing from Jeremy. I feel the author either needed to leave Jeremy out completely or add more narrative from his perspective. The plot is slightly scattered due to the alternating perspectives, but doesn't retract from the overall readability of the story.

This book was incredibly cute, I'll give the author that. Alice and Millie are incredibly sympathetic characters both separately and apart, and the message of acceptance both characters convey is a sweet one (although it does get a touch pushy and unrealistic towards the end). The two girls don't even meet until over 150 pages in, so the conflict regarding the exposure of the Yare and the resolution happen really fast, to the point where it feels quite rushed. The "twist" at the end obviously indicates there will be a sequel, which though the twist itself is predictable, the cliffhanger leaves one feeling unsettled since there's no indication that this is anything other than a one-shot story.

Recommendation:
Though this book has its issues, it does convey a much-needed message which middle-grade readers will appreciate.

Thoughts on the cover:
I like the night scene with the abundance of blues. It's subtle, but Millie's reflection in the lake is quite fitting and a nice touch.