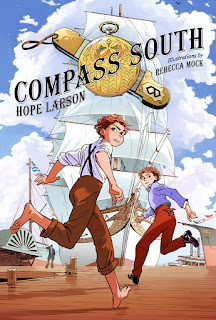 When their father goes missing, twelve-year-old twins Alexander and Cleopatra Dodge join the Black Hook Gang. Soon after, Alex is arrested for burglary, but the twins cut a deal with the police chief and leave town to start a new life. They assume different identities, but upon their arrival in New Orleans, they find even more trouble. Alex is separated from his sister and pressed into service on a ship bound for San Francisco, and Cleo, hoping to meet him at the end of his journey, stows away on a steamer ship.

What neither twin realizes is that they hold the keys to a lost pirate treasure, and the pirates want their treasure back. Pursued by the bloodthirsty Captain Felix Worley and Luther, vengeful leader of the Black Hook Gang, Alex and Cleo must survive a series of harrowing adventures if they're ever going to to see each other-or their father-again.

Review:
This is a wonderful graphic novel in the style of an old fashioned adventure story, complete with a male and female protagonist to appeal to both boys and girls.

The story opens with Alex and Cleo's unseen mother's death, and their delivery to their adoptive father. Their collective inheritance from their mother, Hester, is a gold pocket watch and a knife, which Mr. Dodge is instructed by the infants' caretaker to never sell. Twelve years later, Dodge has disappeared, and Alex and Cleo are working with the Black Hook Gang, committing robberies with other orphans in order to survive. When Alex is arrested, he and Cleo make a deal with the police chief in a pre-modern version of the Witness Protection Program: they divulge the location of the Black Hook Gang, and they receive a clean slate and a new start in a different city far from New York. When Alex and Cleo are separated, they find themselves on journeys to San Francisco that will take them to the jungles of Central America and to the very ends of the earth at Cape Horn.

This is a perfect addition to a classroom graphic novel collection. Alex and Cleo are spunky protagonists; brave, independent, and eager to seek a new life in the most uncertain circumstances. Silas and Edwin make for good companions to Alex and Cleo, and even orchestrate some decent character development when both sets of siblings are separated from each other. The settings are gorgeous, and the dialogue is peppered with old vocabulary that kids will hardly ever see except in classic adventure stories. This is a series with at least one more book forthcoming (I'm under the impression there will be four books total), but this first instalment can also stand alone quite nicely.

Recommendation:
An engaging adventure story that will certainly appeal to readers. I will eagerly await the next book in the series.

Thoughts on the cover:
A really dynamic cover that showcases the energy of the story quite well.
Posted by Andrea at 8:43 PM