The Time of the Fireflies - Kimberley Griffiths Little 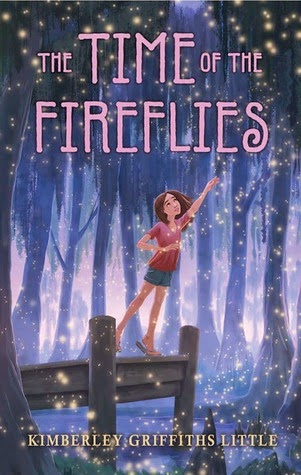 When Larissa Renaud starts receiving eerie phone calls on a disconnected old phone in her family's antique shop, she just knows she's in for a strange summer. A series of clues leads her to the muddy riverbank, where clouds of fireflies dance among the cypress knees and cattails each evening at twilight.

The fireflies are beautiful and mysterious, and they take Larissa on a magical journey through time, where she learns the secrets of her family's tragic past - deadly, curse-ridden secrets that could endanger the future of her family as she knows it. And when her mother suddenly disappears, it becomes clear that it is up to Larissa to prevent history from repeating itself, and a fatal tragedy from striking the people she loves.

Review:
I picked this up purely for the cover and the title, so I was pleasantly surprised at how much I enjoyed this book.

Larissa is twelve and summer has just begun in the Louisiana bayou. Her mother is expecting a baby in a few weeks, so Larissa is helping out her parents in their antique shop that doubles as their home. One day, after getting a mysterious phone call from one of the old phones in the shop that isn't even hooked up, Larissa finds her way to the dock where swarms of fireflies transport her to the same patch of land in 1912 where she witnesses her ancestors come under a curse that would haunt their family for generations. After several more trips back through time seeing subsequent generations of her family, Larissa discovers the source of the curse and needs to end it before it affects her mother and unborn baby sister.

I loved the atmosphere of the book, it felt like I was transported to a summer in the south. The author did a really good job with the 1912 scenes too, I was getting a total "Gone With The Wind" vibe from them (and yes I know GWTW was Civil War era), particularly the scenes with Anna and her Uncle Edgar. I especially liked how the author included southern dialect complete with French and Creole references, it added to the authenticity.

The book has some good themes too, such as giving someone a second chance like Larissa does for Alyson after the accident, and about how wrong it is to take something that doesn't belong to you.

I really appreciated the ending, it went exactly how I felt it should.

Recommendation:
A wonderful read with excellent atmosphere and setting; plus who wouldn't love a kids book about time travel via fireflies and cursed dolls?

Thoughts on the cover:
I love the illustration and the blue and purple colour scheme, very eye-pleasing.
Posted by Andrea at 7:01 PM