The Beast Within - Serena Valentino 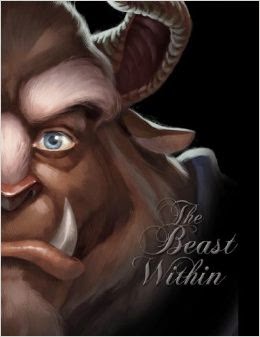 The tale is as old as time: a cruel prince is transformed into a beast. A lovely maiden comes into this monster's life. He is transformed by her compassion, and the love he feels for her in return. The two live happily ever after.

But any tale, especially one as storied as Beauty and the Beast's, has been told many different times, and in many different ways. No matter which version one hears, the nagging question remains: what was it that transformed the prince into the beast we are introduced to?

This is one version, pulled from the many passed down through the ages. It's a story of vanity and arrogance, of love and hatred, of beastliness, and of course, of beauty.

Review:
Anyone who reads my reviews knows I'm a huge Beauty and the Beast fan. From the original fairy tales, to the Disney version, to creative retellings; I love them all. So of course, when I found out that Disney was making a book that explores the Beast's past as the Prince before the curse, I was all over it. The author is seemingly writing these in a series examining the untold tales of Disney villains (though the Beast doesn't exactly fit the villain motif), she previously did an instalment on the evil queen from Snow White that was well received. That is why reading this particular book was so incredibly painful; her other work received praise, which made me wonder what the heck went wrong here.

The story begins with Belle imprisoned in the Beast's castle as he reflects on his sorry state, wondering if he is even capable of the kind of love Belle showed towards her father by taking his place as prisoner. Then by a series of flashbacks we see the man the Beast once was. The Prince is friends with Gaston, and the way the author worked this in actually made it believable that they grew up together. The Prince is engaged to Circe, the youngest of a group of four witches. When Gaston realizes that Circe is the daughter of a pig farmer and informs the Prince, the engagement is cancelled. Heartbroken, Circe and her sisters curse the Prince and his household, but contrary to the film the Prince doesn't immediately change into the Beast physically. The novel examines more of the psychological changes that occur as he continues on with his 'beastly' behaviour, paranoid that what Circe cast upon him will come to fruition. As the curse slowly becomes apparent with every horrible act the Prince commits, his household changes as well. Here is another difference from the film: where servants turn into household objects that everyone else can still see and interact with, the Prince sees them merely as inanimate objects, leaving him incredibly isolated. The ghastly statues in the castle seen in the film, while harmless to everyone else, actually come alive to torment the Prince. These are details that I actually enjoyed, and if the rest of book had simply kept up with these I would've had a different impression.

The writing is poor. The word 'butt-chinned' is used to describe Gaston; I'm shocked that appeared in a formal novel, especially one set in Romance-era France where a contemporary word like that wouldn't be used. The plot is disjointed and half the time I couldn't tell what the author was trying to focus on. First there's the Beast agonizing over Belle, then backstory on the Prince and Circe with lots of Gaston, then a lot of focus on Circe's sisters trying to sabotage everything between the Prince and the annoying Princess Tulip, then talk of Ursula (obviously the focus of the next book), and then bam back to the Beast and Belle falling in love and breaking the curse. Belle is not given much focus at all, which is fine if the book only examined the Beast's story, but then to talk about how the curse is broken without Belle's character development is misguided. There are inconsistencies between the book and the film that don't make sense. If Gaston and the Prince were friends, does he not recognize the castle he spent so much time in? How does Belle attend the Prince's ball at the castle pre-curse and not put two and two together later on when she's back there? If the Prince was cursed around 11-ish according to the film, then why is he seen pre-curse as a late teen trying to woo all the ladies?

Recommendation:
Overall a disappointment, which is sad since I saw potential here.

Thoughts on the cover:
A very cool thing they did was to put the Prince's face on the actual cover underneath the Beast's on the dust jacket.