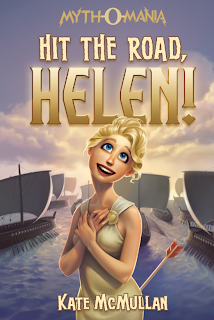 Acclaimed author Kate McMullan is back with a brand-ew addition to her popular Myth-O-Mania series! As fans of the series know, when it comes to the Greek myths, things aren't always what they seem. Luckily, Hades, King of the Underworld, is here to set the record straight. This time around, Hades tackles the Trojan War and tells readers what really happened in the epic battle. Think Helen is to blame? Think again!

Review:
I got this in my mailbox while I was doing my teacher course weeks back and have only now been able to get around to reading it. Apparently this series began over a decade ago and this is the first new instalment since 2003. I'd never come across the series before either as a kid or as a teacher, so was quite excited to try out something new.

If the rest of the books are anything like this one, they're perfect to get kids interested in mythology. The book is narrated by Hades (and given a snarky no-nonsense voice to boot), and written with a ton of humour and pop-culture references modified to suit the context of the story. The book contains the same information about the Trojan War (and all the background information and related figures) that you would find in a mythology book geared towards an older audience, but makes everything much more accessible for children, particularly kids in the tween ages and reluctant readers.

Students where I live do a social studies unit on ancient cultures (Greece, Rome, Mayan) in grade 5, so these books would be perfect for teachers to have in their classroom library while they work on that unit. Kids also do a unit on Greek mythology in grade 9 English, so these books would probably still be appropriate for certain readers even at that age.

Recommendation:
Informative, funny, and accessible for kids. A wonderful addition for school study or reading for fun.

Thoughts on the cover:
Apparently all the books in the series got cover redesigns similar to this new one, which is always good so everything looks uniform.
Posted by Andrea at 12:39 PM