A Blue So Dark - Holly Schindler 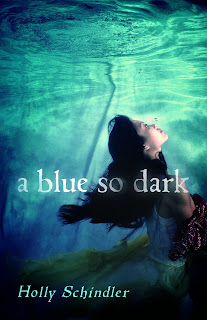 Summary:
From the inside of the book:
Fifteen-year-old Aura Ambrose has been hiding a secret. Her mother, a talented artist and art teacher, is slowly being consumed by schizophrenia, and Aura has been her sole caretaker ever since Aura’s dad left them. Convinced that “creative” equals crazy, Aura shuns her own artistic talent. But as her mother sinks deeper into the darkness of mental illness, the hunger for a creative outlet draws Aura toward the depths of her imagination. Just as desperation threatens to swallow her whole, Aura discovers that art, love, and family are profoundly linked—and together may offer an escape from her fears.

Review:
I love realistic fiction books that deal with heavy subject matter like this, I think they're necessary for kids purely because the subject matter doesn't show up too often.

Aura Ambrose is nearly 16 and her family's falling apart. Her mother is suffering from schizophrenia and her father has left them and since remarried, leaving Aura in the role of caretaker. Her best friend Janny is a teenage mom, so she can't help much, and her grandmother doesn't even know Aura exists. What's worse, Aura is convinced that being artistic and creative is linked somehow to schizophrenia and rejects her creative side. When her mother's meds run out and her episodes become more severe, Aura debates whether to tell someone or to try to take care of her mother all on her own, which of course doesn't lead to a better quality of life for her.

A Blue So Dark is beautifully written, the author illustrates the muddle of mental illness and the confusion felt by those affected by it either directly or indirectly. But in spite of the beautiful writing I couldn't get completely into the book, mostly because of faults I found in Aura's character. She's 16, and she knows a fair bit about her mother's illness; she knows it tends to be hereditary, which scares the crap out of her, as it should. But she also thinks being creative leads to being schizophrenic, which is the main issue for Aura because she denies her creative self, but the whole idea just isn't true. You'd think with all the research Aura does she'd figure that out, so it seems unlikely to me that she'd actually go on believing this, unless she was much much younger and her thinking wasn't as sophisticated, but she's 16, so I kept wanting to smack her up the head for being dumb. Also, the fact that Aura not only promises her mother that she won't feed her meds, which contributes to the deterioration of mother's condition, and fails to explicitly tell anyone sooner of how seriously off her mother is, made me want to smack her more. To me, Aura contributed to her own problem, so I didn't feel for her as much as I probably could have.

Recommendation:
Wonderfully written book about mental illness and how much it impacts families. People who don't have an issue with Aura will enjoy this much more than I did.

Thoughts on the cover:
I love the cover, it plays with the water metaphor that Aura uses to describe her fear of succumbing to the same mental illness that affects her mother.
Posted by Andrea at 4:45 PM