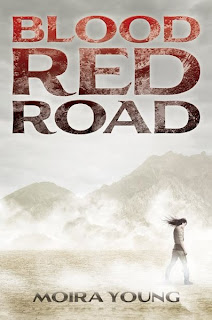 Summary:
From Goodreads.com:
Saba has spent her whole life in Silverlake, a dried-up wasteland ravaged by constant sandstorms. The Wrecker civilization has long been destroyed, leaving only landfills for Saba and her family to scavenge from. That's fine by her, as long as her beloved twin brother Lugh is around. But when a monster sandstorm arrives, along with four cloaked horsemen, Saba's world is shattered. Lugh is captured, and Saba embarks on an epic quest to get him back.
Suddenly thrown into the lawless, ugly reality of the world outside of desolate Silverlake, Saba is lost without Lugh to guide her. So perhaps the most surprising thing of all is what Saba learns about herself: she's a fierce fighter, an unbeatable survivor, and a cunning opponent. And she has the power to take down a corrupt society from the inside. Teamed up with a handsome daredevil named Jack and a gang of girl revolutionaries called the Free Hawks, Saba stages a showdown that will change the course of her own civilization.

Blood Red Road has a searing pace, a poetically minimal writing style, violent action, and an epic love story. Moira Young is one of the most promising and startling new voices in teen fiction.

Review:
Blood Red Road is another highly anticipated upcoming YA dystopian title, so I was over the moon at being able to read it before its June release.

18-year-old Saba lives with her father, twin brother Lugh, and 9-year-old little sister Emmi in their isolated home at Silverlake. In a future where the entire world is desolate, desert-like, and ravaged by sandstorms, Saba is completely content with life as long as she's with Lugh. When Lugh is kidnapped and their father is killed by raiders called Tontons, Saba and Emmi set out to rescue their brother. Through the various trials and tribulations along the way, Saba truly comes into her own without her brother to depend on, and man is she awesome. Saba is a fiery fighter, letting what she calls the "red hot" overcome her to defeat her enemies either in a gladiator-like episode that earns her the nickname "Angel of Death" to an amazing scene battling giant mutated worms. Blood Red Road isn't as much about rescuing Lugh as it is about Saba's growth as a person: she learns to have her own identity outside of being Lugh's twin sister, she learns to love Emmi like a true sister, and learns to love others period. Coupled with intense action, this makes Blood Red Road an addicting read.

Blood Red Road is written in Saba's first person point of view, and since Saba is illiterate, the book is done completely in dialect. The dialect here did take me some time to get used to, that I'll admit. The coarseness of it, and the constant short, clipped sentences grated on me for a while until I just got used to it, so that might be an issue for some readers. Unlike many of the recent YA dystopian titles that deal with a highly organized, very science-fiction based universe, Blood Red Road is as gritty and raw as you can get: the characters wear rags and depend on herbs for medicine, slavery is a very real concern for the characters, and the written word is so rare that practically no one is literate. It almost reads like a fantasy rather than a dystopian. The author does do a wonderful job of describing the atmosphere and setting of Saba's world, even using Saba's limited language, but I think that's what makes the descriptions so real is the toned-down simplicity of Saba's language.

Some of the character personalities are cliched, like Jack and Ike, but they are very likable characters nonetheless. Plus there's Nero, I dare people to not like a crow that acts like a human. I like the change in Saba's character as the story progresses, but I think the transition could've been handled a little bit better as it seemed rushed to me. The romance is a complete cliche, the typical "I really like you but I'm going to act like I hate your guts" kind of thing, and it's sooooo predictable but my annoyance was lessened by the fact that I really liked Jack as a character (cliche though he was). Plus I loved the song Jack sings to Saba later on in the book, I could almost feel the emotions of the scene in my head.

This is the first book in a series (not sure if it's a trilogy or more), but the author does a nice job of making the book stand alone without an insane cliff-hanger that will make you scream for the next book. I'll definitely be putting this series on my radar for future purchases though, it was really enjoyable.

Recommendations:
A gritty, action-adventure dystopian that focuses on the journey/quest motif with a wonderful setting and likable characters. The dialect might take readers a while to get used to, but it has its charm. If you're looking for something different in the YA dystopian genre, read this when it's released in June, I don't think you'll be disappointed.

Thoughts on the cover:
The reds, browns, and grays work nicely here, and I like the texture shown in the title. I like the image of Saba walking through the dust-cloud in the desert.
Posted by Andrea at 12:42 PM