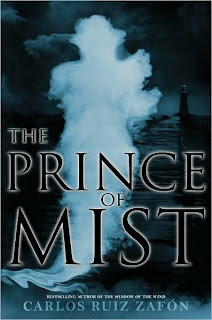 Summary:
From the inside cover:
It's wartime, and the Carver family decides to leave the capital where they live and move to a small coastal village where they've recently bought a home. But from the minute they cross the threshold, strange things begin to happen. In that mysterious house still lurks the spirit of Jacob, the previous owners' son, who died by drowning.

With the help of their new friend Roland, Max and Alicia Carver begin to explore the strange circumstances of that death and discover the existence of a mysterious being called the Prince of Mist--a diabolical character who has returned from the shadows to collect on a debt from the past. Soon the three friends find themselves caught up in an adventure of sunken ships and an enchanted stone garden--an adventure that will change their lives forever.

Review:
This book received a lot of buzz when it was released a few months ago, mainly because the author's adult novels (Shadow of the Wind) are apparently amazing and everyone was chomping at the bit to read his early young adult stuff, which was previously tied up in international licensing limbo.

In 1943, Max and his family move from the city to the coast and live in a house long abandoned in the wake of tragedy when a child passed away. When Max's little sister is mysteriously injured and falls into a coma, Max and older sister Alicia are left behind while their parents stay at the hospital. More mysterious events occur, including Max's foray into a garden full of stone sculptures that seemingly move. When Max and Alicia seek out information from their friend Roland's grandfather, they are left with more questions than answers until something happens that they cannot ignore.

The Prince of Mist is a simple story, but very well told. It immediately reminded me of a teen's first foray into the Faust legend, the Prince of Mist character being a devil/demon that grants wishes in exchange for a person's life, which is needed for him to survive throughout the ages. The characters could've used a little more development, they fell a little flat, although I did like them all. In this case it reminded me of old-fashioned stories that relied mostly on plot rather than character development. But I'm not complaining, because the well-told story more than makes up for flat characters. The content is sufficiently creepy, including among other things, a clown with fangs....if that doesn't remind you of a certain Steven King image enough to give you the shivers, I don't know what will.

I can't give away too much for fear of spoilers, but if you're looking for a simple but well told horror story that does an awesome job of visual storytelling (you can really picture yourself in the seaside town as you're reading), then give this a go.

Recommendation:
If you're looking for a simple Faust story that's got a good dose of creepy, read this! 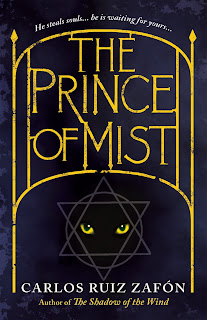 I actually prefer the UK cover in this case. The US cover is literally a cloud on a dark background, while the UK cover has the creepy yet corny glowing eyes with the 6 pointed star mentioned in the book. I think if the US cover had tried to make the cloud look more like a human figure it would've been more effective.
Posted by Andrea at 11:02 AM