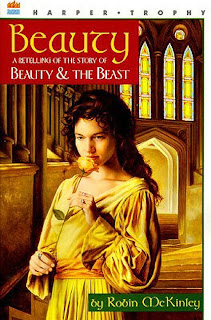 Summary:
From Amazon.ca:
Beauty has never liked her nickname. She is thin and awkward; it is her two sisters who are the beautiful ones. But what she lacks in looks, she can perhaps make up for in courage.

When her father comes home with the tale of an enchanted castle in the forest and the terrible promise he had to make to the Beast who lives there, Beauty knows she must go to the castle, a prisoner of her own free will. Her father protests that he will not let her go, but she answers, "Cannot a Beast be tamed?"

Review:
I found this book in a classroom library while at work today, and since I am a sucker for Beauty and the Beast stories, I borrowed it and finished it all before I left work. This is more like the traditional story with the girl named Beauty having sisters and their father ends up promising Beauty to the beast when he is caught stealing a rose from his garden. I liked the little backstory behind the sisters' names (Grace, Hope, Honour) and how Beauty is just a nickname. The line where Beauty and Beast are talking about her names and he says "I welcome Beauty and Honour", is one that I would've been disappointed in the author if she hadn't worked that pun in there. There is a lot of character development in Beauty's family: her father, her sisters, her brothers -in-law, which is rarely something I see in these stories since the sisters are supposed to be slightly evil, which is not the case here. The father is sympathetic too because he doesn't offer Beauty to the Beast when he is caught, she insists on going to take his place. Normally, the father basically trades his daughter's life for his own, so this version brings the father up a notch. The plot is believable and works into the basic elements of the original story and extends it, the Beast doesn't even appear until more than 100 pages in, so all that is used to explore Beauty and her family. I would have liked to see more interaction between Beauty and the Beast, half the time Beauty is off on her own so you don't really see a lot of instances where that romance develops, she more or less tells you it did rather than witnessing the scenes that made it so. Out of all the Beauty and the Beast novel adaptations I've read this one is the most faithful to the original, but I think Beastly by Alex Flinn is still my favourite in terms of the novels, television and movie adaptations are another story ('cause I'm just that geeky).

Recommendation:
If you're looking for an adaptation of Beauty and the Beast that's faithful to the original while expanding on that story, read this!

Thoughts on the cover:
I love how all these adaptations clearly state that the Beauty character isn't supposed to be all that beautiful, but when you see images of her, she clearly is. Ah well, maybe all these girls just have very low self esteem and are ignorant of their own beauty.
Posted by Andrea at 5:52 PM