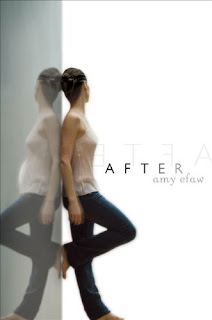 Summary:
From Amazon.com:
An infant left in the trash to die. A teenage mother who never knew she was pregnant . . .
Before That Morning, these were the words most often used to describe straight-A student and star soccer player Devon Davenport: responsible, hardworking, mature. But all that changes when the police find Devon home sick from school as they investigate the case of an abandoned baby. Soon the connection is made—Devon has just given birth; the baby in the trash is hers. After That Morning, there’s only one way to define Devon: attempted murderer.

And yet gifted author Amy Efaw does the impossible— she turns Devon into an empathetic character, a girl who was in such deep denial that she refused to believe she was pregnant. Through airtight writing and fast-paced, gripping storytelling, Ms. Efaw takes the reader on Devon’s unforgettable journey toward clarity, acceptance, and redemption.

Review:
This is one of those teenage issue books that you might not always want to read but you know you'll appreciate it after you do read it. I'd been trying to get my hands on this for a while and finally just ended up buying it rather than waiting for it at the library. I'm glad I did because I'd have ended up buying a copy anyway, it's that good.

The book opens with 15-year-old Devon staying home sick in the morning and police canvassing the area for information about a baby abandoned in a dumpster. When Devon's mother opens the door and police find Devon in blood-soaked pants laying on the couch, they know the baby is hers and she is quickly hospitalized and later arrested. The book essentially covers Devon's various stages of court proceedings and juvenile hall detention, all the while revealing facts about Devon and what drove her to do what she did. This was difficult to read at times given the subject matter, and at first it was very hard for me to even like Devon because of it. As you read though, she emerges as a sympathetic character. Devon is more mature and responsible than her mother, who herself had Devon at age 16, she's stellar student and athlete, and everyone loves her. Everyone expects Devon to do the right thing all the time, and she holds herself under very strict guidelines, won't allow herself to loosen up. So how could such a good girl do such a horrible thing? The author researched this book extremely well, she paints a picture of Devon as a girl who became so deep in denial that she didn't allow herself to acknowledge she was pregnant because she didn't want to turn out like her mother (her number one rule for herself being not having sex). As you see how Devon began to withdraw from her studies and soccer and her friends, you start to think why nobody noticed that there was something very wrong and try to talk to her about it. The book is as much about Devon's actions as it is about the actions of those around her. Devon was disturbed psychologically and did some things because of it, but the warning signs were all there, and nobody cared enough about her life to say something....granted, Devon didn't exactly make it easy for them.

The writing is amazing, the plot moves along quickly with no slow points, and the subject matter is more interesting than a lot of the stuff I've read lately. The ending surprised me a lot, I'm not sure how I feel about it, but it made me like Devon and want to slap her at the same time.

Recommendation:
Such a good book, read this! Warning though, some parts are slightly graphic (lots of blood and birthing scenes etc.), so a heads up for people sensitive of squicky stuff.

Thoughts on the cover:
Very simple, but once you realize the difference in the mirror image the effect is very profound.
Posted by Andrea at 7:09 PM