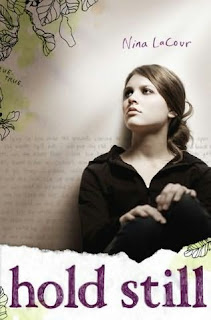 Summary:
From Amazon.com:
dear caitlin, there are so many things that i want so badly to tell you but i just can’t.

Devastating, hopeful, hopeless, playful . . . in words and illustrations, Ingrid left behind a painful farewell in her journal for Caitlin. Now Caitlin is left alone, by loss and by choice, struggling to find renewed hope in the wake of her best friend’s suicide. With the help of family and newfound friends, Caitlin will encounter first love, broaden her horizons, and start to realize that true friendship didn’t die with Ingrid. And the journal which once seemed only to chronicle Ingrid’s descent into depression, becomes the tool by which Caitlin once again reaches out to all those who loved Ingrid—and Caitlin herself.

Review:
This is one of those books on difficult subjects that I wish I had when I was in high school. During my years in high school, we had a classmate commit suicide and a few others die of illnesses and accidents, so we were no strangers to the memorial assemblies and grief counselors in class. Amazing how the kids I teach now don't believe me when I tell them that a classmate will pass away during their years in high school. With most kids never attending a funeral until later in their lives, sometimes the first experience a kid will have with death is when someone from school passes away (either by accident, suicide, illness etc.). Most people have no idea how grief will affect them until they're thrust into a situation like this, and I think this book is wonderful if for nothing else than showing how Caitlin deals with her grief.

Ingrid commits suicide at the end of the school year, Caitlin's family spirits her away to a cabin for the summer in order to recover from the shock if Ingrid's death, so Caitlin doesn't really deal with her grief until school starts up again in September. Her photography teacher that she used to love now ignores her, she finds herself friendless without Ingrid, and avoids looking at herself in a mirror. Eventually, she finds Ingrid's journal underneath her bed and slowly reads through it, trying to understand the friend that she never even knew was sick and on anti-depressants. As time passes into winter and then spring, Caitlin reads through Ingrid's journal and her sketches and photographs and eventually starts to rebuild her life without Ingrid in it.

I love the little details in this book, like how Caitlin recites genetic trait facts to focus on something else when someone around her talks about Ingrid. When my grandmother died, I used to say the names and colours of flowers in my head to keep myself from crying at her funeral, so it amused me that someone other than me thought of this too. The photography element running through the book is interesting too, how Caitlin loses her passion for photography until she sees a series of pictures of herself that Ingrid took, and it invigorates her love of the hobby she and Ingrid shared. I like how they included the photography teacher as well, it shows readers that when someone you care about dies, it's not just you who's hurting, there could be people you've never even considered who might be hurting just as much if not more than you. It also shows that people grieve in different ways, and to try not to hold it against someone if they act out while in grief.

Recommendation:
A wonderful novel about dealing with the death of someone you care about, especially when that death is from a suicide. I would definitely give this to an intermediate or high school class if I needed something dealing with that subject matter, but I'd be more hesitant about giving it to an intermediate class since there's a bit of swearing and sexual stuff that pops up every now and then, plus the mention of cutting and graphic detail about the suicide.

Thoughts on the cover:
Considering the whole photography theme that runs through the novel, I'd thought the cover would be more like a scrapbook or a showcase of photos or something along that vein. Though the inside covers keep with the journal theme with little drawings done in purple ink.
Posted by Andrea at 6:07 PM