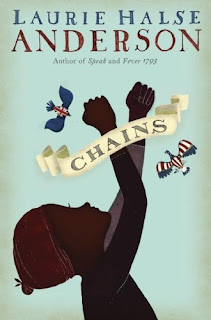 Summary:
From Amazon.ca:
If an entire nation could seek its freedom, why not a girl?
As the Revolutionary War begins, thirteen-year-old Isabel wages her own fight...for freedom. Promised freedom upon the death of their owner, she and her sister, Ruth, in a cruel twist of fate become the property of a malicious New York City couple, the Locktons, who have no sympathy for the American Revolution and even less for Ruth and Isabel. When Isabel meets Curzon, a slave with ties to the Patriots, he encourages her to spy on her owners, who know details of British plans for invasion. She is reluctant at first, but when the unthinkable happens to Ruth, Isabel realizes her loyalty is available to the bidder who can provide her with freedom.

From acclaimed author Laurie Halse Anderson comes this compelling, impeccably researched novel that shows the lengths we can go to cast off our chains, both physical and spiritual.

Review:
I am slowly getting to read all of the books this author has written, and I'm finding her historical fiction is just as good as her young adult novels. Chains is about slavery, but not slavery in the 1800s which is when most slavery stories tend to take place, but during the Revolutionary War (1776-1777). It reminds us that slavery was a British thing before it was an American thing, which is good to remember since we in Canada think our history was above all that barbaric stuff. The novel of course describes the life of child slaves Isabel and Ruth, but the main idea of this novel is the concept of freedom both for the Americans and the slaves. Americans wanted freedom from Britain but didn't offer it to their own slaves, Britain wasn't willing to give freedom to Americans but offered it to slaves from Patriot families who offered to serve the British. Isabel struggles with the idea of loyalty throughout the book and switches sides back and forth until she realizes that she can only be loyal to herself and the only person that can give her freedom is herself. It's a wonderfully written book, and Isabel's narration is well done. The continuation is coming out this fall and I can't wait to read it.

Recommendation:
If you like well-written historical fantasy about a rarely discussed topic (slavery during this specific time period), then read this!

Thoughts on the cover:
I love it. I like the blue background and the almost burgundy tones they used for Isabel's skin. I love how her hands are positioned as if the title banner has her bound.
Posted by Andrea at 3:40 PM