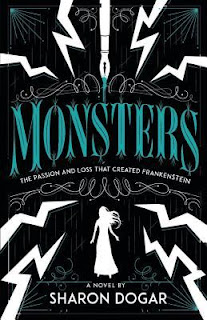 1814: Two 16-year-old stepsisters run away with a married man. The results are devastating and the ripples will be felt for centuries.

This is the incredible story of Mary Shelley - radical, rebellious, and entranced. It is the story of a young woman who defies tradition and society, and who draws upon the monstrous elements of her own life to create the most memorable monster of them all.

Celebrating 200 years since the publication of Frankenstein, acclaimed writer Sharon Dogar brings to life the passion, tragedy and forbidden love of its teenage author.

Review:
I studied Frankenstein in university, as well as the work of several romantic poets, including Shelley, Byron, and Keats; so the fact that they were all acquainted with each other always interested me. I've used Frankenstein in my classes before, and had to explain a bit about Mary Shelley, so this novel peaked my interest as soon as I was made aware of it.

This novel begins with Shelley as Mary Wollstonecraft Godwin at 14 years old, daughter of deceased revolutionary writer Mary Wollstonecraft and philosopher William Godwin. Mary's family is in debt, and combined with a tumultuous relationship with her stepmother, fiery Mary is sent to stay with family friends in Scotland. Despite finding some solace in Scotland, her family recalls her to London two years later in order to help impress a young, potential benefactor by the name of Percy Bysshe Shelley. All the daughters in the Godwin household (Mary, Jane, and Fanny) fall for Shelley's good looks and intelligence, but it is Mary that Shelley is most taken with.

Quite the revolutionary, Shelley is both an atheist and a bigamist, which doesn't earn him the best reputation in 19th century England. Despite this, Mary falls for him. When Mary's father refuses to give his consent for Mary to live with the already married Shelley, both Mary and her stepsister Jane (who would later change her name to Claire Clairmont) run away with Shelley in order to establish a community of like-minded individuals. Rumours of bigamy leads to the group being run out of England, and they seek refuge in France, and later Switzerland. It is in Geneva during the summer of 1816 where Mary conceived of the idea for Frankenstein when Byron proposed that each person in the group come up with a ghost story to share. At this point, Mary's first child with Shelley had already died, and her second child would die within a few short years. Claire's first child, fathered by Shelley, had already been placed for adoption, and she was pregnant with her second child, fathered by Byron.

Mary's feelings surrounding the death of her own mother shortly after her birth, the death, abandonment, and anxieties about not only her own children but the affiliated children of the group, as well as recent scientific news and advancements all contributed to the atmosphere and mood of Frankenstein.

I think one thing that stands out while reading this book was how idealistic everyone in the group was. Shelley legitimately thought he could do what he wanted with little to no recourse, Mary assumed her father would forgive her, especially after she had children; Claire was perfectly content to share Shelley with Mary, despite the fact that she knew he loved Mary more. Like many women, Mary's priorities change when she becomes a mother. The lackadaisical attitude of adolescence seemingly evaporates and she becomes more focused on the health and well-being of her children while still devoting time to her writing, despite the fact that she was still a teenager when she became a mother.

The naive life the group lead is definitely not idealized in the novel. This was underscored by the fact that the men in Mary's life seemed completely oblivious to the well-being of everyone else, leading to not only mental and emotional harm, but death as well. I used to idealize the Romantic era and its literature and figures; needless to say, I no longer do.

Recommendation:
Wonderfully written and well-researched. This is a great read if you're interested in the background of Frankenstein or just Romanticism in general.

Thoughts on the cover:
Not quite as sophisticated as I would've liked, it doesn't really match the contents in terms of tone, but it's okay.