Behind the Legend: Unicorns - Erin Peabody 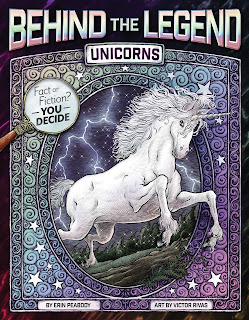 Do you think elegant, elusive unicorns are real or just a myth? You decide in this new book in the nonfiction series, Behind the Legend!

Behind the Legend looks at creatures and monsters throughout history and analyzes them through a scientific, myth-busting lens, debating whether or not what is known about the creature is adequate proof of its existence. In Unicorns, readers learn about all the sightings and evidence, from ancient stories of acclaimed figures such as Julius Caesar and Marco Polo who sought to capture unicorns to the reasons behind why they were hunted so fiercely to being with. It also explores additional history about the creatures, including why their horns were so valued in the medieval era, their presence in pop culture, and people's ongoing search for unicorns in modern times.

Complete with engaging anecdotes, interesting sidebars, and fantastic illustrations, Unicorns is a book kids won't want to put down!

Review:
I initially picked this up for my unicorn-obsessed six-year-old, but realized this is a bit of a difficult read for her, its much more suited for the 8-12 age range.

The book opens with ancient historical records of animals believed to be unicorns from varied sources such as the Bible and Pliny the Elder, moving on to medieval records and then examining modern-day animals that resemble unicorns like the rhinoceros, oryx, and narwhal. The author includes a nice list of bibliographical sources, as well as a list of books and novels that feature unicorns for further reading.

Recommendation:
This is a lovely series that is perfect for middle grade readers that are interested in fantasy and folklore. Other instalments include: Dragons, Zombies, Werewolves, Big Foot, and the Loch Ness Monster.

Thoughts on the cover:
Nicely designed with an appealing colour scheme.
Posted by Andrea at 5:10 PM