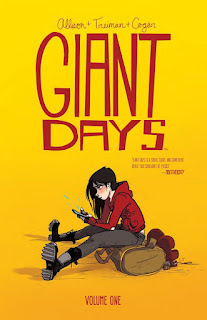 Susan, Esther, and Daisy started university three weeks ago and became fast friends. Now, away from home for the first time, all three want to reinvent themselves. But in the face of hand-wringing boys, "personal experimentation," influenza, mystery-mold, nu-chauvinism, and the willful, unwanted intrusion of "academia," they may be lucky just to make it to spring alive. Going off to university is always a time of change and growth, but for Esther, Susan, and Daisy, things are about to get a little weird.

Review:
This is by the same publishing company that releases Lumberjanes, so I'll be honest, I picked this up on that fact alone. And I wasn't disappointed.

Esther is a goth with a sarcastic sense of humour, Daisy is a sheltered girl who was previously homeschooled, and Susan is a bit jaded. All three are first-years at a university in Britain and get along swimmingly. The girls weather their first away-from-home encounters with being sick, dealing with chauvinistic boys, when pieces of the past come back to haunt them, and just navigating university life. Like Lumberjanes this series has a similar sense of humour, diversity in many areas, and passes the Bechdel Test (yay for female presence in comics!).

Recommendation:
Definitely worth a read if you're a fan of Lumberjanes or any of the other Boom! Box titles.

Thoughts on the cover:
I like this candid shot of Esther, especially against the yellow background.
Posted by Andrea at 10:20 PM