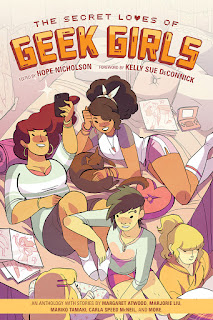 The Secret Loves of Geek Girls is a nonfiction anthology mixing prose, comics, and illustrated stories about the lives and loves of an amazing cast of female creators. Featuring work by Margaret Atwood (The Heart Goes Last), Mariko Tamaki (This One Summer), Trina Robbins (Wonder Woman), Marguerite Bennett (Marvel's A-Force), Marjorie Liu (Monstress), Carla Speed McNeil (Finder), Sam Maggs (The Fangirl's Guide to the Galaxy), Adrienne Kress (The Friday Society), and over fifty more creators. This expanded edition includes tales told from both sides of the tables: from the fans who love video games, comics, sic-fi, to those who work behind the scenes as creators and industry insiders.

Review:
God, I wish this had been around when I was in university. I've been saying that about a few books lately, but it's true. For an anthology about sex and relationships specifically from the point of view of geeky women, this would've saved me a lot of grief and headaches.

This is a really fantastic book that, upon doing some research into its origins, I apparently missed the Kickstarter, which I assure you I am now kicking myself for. But that's not too unfortunate, because now I have the expanded edition to read. The book is a mashup of personal anecdotal stories, comics, illustrations, and essays about relationships and identities relating to identifying as a geek girl.

There are a great many pieces in here that I enjoyed, including A Divorcee's Guide to the Apocalypse by Katie West, URL > IRL by Gita Jackson, Yes, No, Maybe and Regards to the Goblin King by Megan Kearney (her art is amazing and I'm now a new convert to her web comic as well), They Bury You in White by Laura Neubert, If There's Nothing Wrong, It Must Be Love by Diana McCallum (this one really hit home), and Heard it Through the Grapevine by Brandy Dawley.

I'm amazed at how many local women (this is a Canadian anthology with many contributors residing around Toronto) grew up with similar circumstances and feelings regarding being a geek and just how many dealt with other aspects I wouldn't have even begun to imagine (some contributions touch on issues like race and questioning sexual orientation and gender). Some stories had me pondering if this author was a long-lost sister or a younger/older version of myself because some experiences were almost identical to my own: the awkwardness of not having crushes or dating when it seems like everyone else is, the struggle to find people who really understand and accept you, and the minefield that is dating and breakups. I'm also more than a little pleased and validated at how many of the contributors referenced Labyrinth, Beauty and the Beast, Jane Eyre, Sailor Moon, fanfiction, and more anime than I can count that were all so important to me growing up.

Recommendation:
This is the kind of book I wish a mysterious donor would buy in bulk and distribute to all adolescent geek girls just to save them the angst. It shines a light on thriving emotionally as a female within geek culture, and the sheer diversity reflected here in terms of race, culture, sexuality, and body types is really refreshing.

Thoughts on the cover:
I love that Noelle Stevenson did the cover art, it's a great added touch. The cover reflects the diversity found throughout the book's content, which is always nice to see.
Posted by Andrea at 2:03 PM