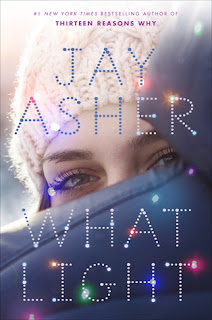 Sierra's family runs a Christmas tree farm in Oregon. It's a bucolic setting for a girl to grow up in, except that every year, they pack up and move to California to set up their Christmas tree lot for the season. So Sierra lives two lives: her life in Oregon and her life at Christmas. And leaving one always means missing the other.

Until this particular Christmas, when Sierra meets Caleb, and one life eclipses the other.

By reputation, Caleb is not your perfect guy: years ago, he made an enormous mistake and has been paying for it ever since. Sierra sees beyond Caleb's past and becomes determined to help him find forgiveness and, maybe, redemption. But as disapproval, misconceptions, and suspicions swirl around them, Caleb and Sierra can't help but wonder if love really is enough to overcome every obstacle.

Review:
If you know YA literature, you've read Thirteen Reasons Why. So when I found out the author was releasing a new book (his previous book was a collaboration with another author that I never read), I knew I had to pick it up. I think this is a case of simple disappointment: I was expecting another Thirteen Reasons Why and got...well, something not nearly as impressive.

Sierra lives with her mom and dad on a Christmas tree farm in Oregon. Every year, they pack up a trailer and drive to their family's tree lot in California where they live from Thanksgiving to Christmas selling their trees. Though Sierra misses her friends Rachel and Elizabeth back in Oregon, she has Heather and her family in California that she looks forward to seeing; however, this year might be their last in California since the lot is no longer as profitable as it has been in the past. Amidst her conflicting feelings about this, Sierra meets Caleb, an otherwise perfect boy with a smudge on his record. While Sierra immediately falls for him, everyone else tells her not to bother with Caleb due to the rumours about his past. Sierra is a big believer in forgiveness and second chances, so she manages to form her own opinions about Caleb, but between her parents not being too keen on her budding romance when they'll be leaving in a few weeks, and the locals being incredibly disapproving of their relationship, Sierra and Caleb need to determine if and how their love will survive.

This story started off promising with the set-up of Sierra's family and the Christmas tree farm and their annual move, but from the beginning I felt I didn't really connect with Sierra. She's certainly likeable and likes to show off her impressive vocabulary, but there really wasn't much to endear her to me. I felt once Caleb showed up, everything either became way too dramatic and/or cheesy, or just plain unrealistic. For example, regarding Caleb's past, in my opinion it really wasn't as shocking as you anticipate it being, and they milk it over the course of the book and I thought all these characters just needed to collectively let it go and move on with their lives. Sierra falls in love with Caleb waaaay too quickly, and Caleb is portrayed as too perfect with the exception of his "horrible" past. I did enjoy the Christmas setting, and the theme of forgiveness is a good addition to that backdrop, but the details of the story just didn't produce an overall satisfying read.

Recommendation:
This author is known for his first book, go read that one (I recommend it wholeheartedly). This one pales in comparison.

Thoughts on the cover:
I do like it, even though it falls under the "YA cover focusing on a portion of a girl's face" cliche. The twinkling lights and winter hat on Sierra do reinforce the Christmas atmosphere.
Posted by Andrea at 9:13 PM