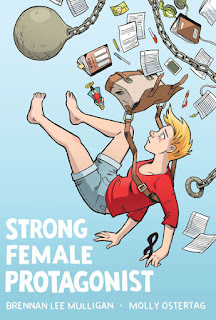 With super strength and invulnerability, Alison Green used to be one of the most powerful superheroes around. Fighting crime with other teenagers under the alter-ego Mega Girl was fun until an encounter with Menace, her mind-reading arch enemy. He showed her evidence of a sinister conspiracy, and suddenly battling giant robots didn't seem so important.

Now Alison is going to college and trying to find ways to actually help the world while still getting to class on time. It's impossible to escape the past, however, and everyone has their own idea of what it means to be a hero...

Review:
I picked this up purely based on the title and that it featured a female superhero; this is one of the rare cases where I hadn't actually read the web comic before reading the collected version.

Alison Green lives in a world where individuals are biodynamic or chromosomally stable, you either have super powers or you don't. Alison came into her powers as a fourteen-year-old and went on to fight the forces of evil as one of the most formidable forces around, until she gave it up at nineteen when she realized it takes more than super powers to be a hero.

I like how this is a much darker and more philosophical type of super hero story (so not for the kiddies or super sensitive readers). Alison is disenchanted with her circumstances and realizes that being one of the most powerful people in the world hasn't changed things to the degree she'd have liked, and that others have actually made more of a difference than she (at least in her mind).

I like how Alison has a darker side, she actually muses on how she fantasizes about killing people because she knows she can but manages to quash it in favour of maintaining her optimism that she can bring about authentic change. I also like how a chapter on Alison's early life was included, and how awesome her parents are portrayed (yay for a hero actually having both parents for a change).

Recommendation:
This is an incredibly refreshing take on the typical super hero story, definitely pick this up. Also, you can continue reading the story online at www.strongfemaleprotagonist.com. The graphic novel version covers chapters 1-4, but you can read the content online for free including what's covered in the graphic novel and beyond.

Thoughts on the cover:
I like Alison in the free fall pose, not sure why. Another nice touch is on the back side of the cover you see Alison in the same pose, just dressed as Mega Girl rather than her civilian self.
Posted by Andrea at 9:06 PM