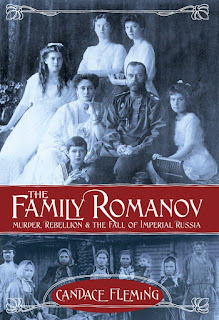 He was Tsar Nicholas II of Russia: the wealthiest monarch in the world, who ruled over 130 million people and one-sixth of the earth's land surface, yet turned a blind eye to the abject poverty of his subjects.

She was Empress Alexandra: stern, reclusive, and painfully shy, a deeply religious woman obsessed with the corrupt mystic Rasputin.

Their daughters were the Grand Duchesses Olga, Tatiana, Marie, and Anastasia: completely isolated and immature, girls who wore identical white dresses and often signed joint letters as OTMA, the initials of their first names.

Their only son was the Tsarevich Alexei: youngest of the Romanovs, heir to the throne, a hemophiliac whose debilitating illness was kept secret from the rest of the world.

Award-winning author Candace Fleming  brilliantly showcases the extraordinary lives of the royal family, from their opulent upbringings to the crumbling of their massive empire, and finally to their tragic murders. Using captivating photos and compelling first-person accounts throughout, Fleming deftly maneuvers between the extravagant lives of the Romanovs and the plight of Russia's poor mass - the starving peasant farmers, the factory workers toiling long hours for little pay, and the disillusioned soldiers fighting in the trenches of World War I. Readers will be transported back to a remarkable time when both a family and an empire came tumbling down.

Review:
We're Russian history enthusiasts in our house, so of course I had to pick this up. This book is incredibly well-written and researched (as evidence by the massive list of sources and footnotes at the back of the book), which made it a joy to read.

I like how the author incorporated first-hand accounts of the other social classes throughout the book (particularly peasants and workers) to illustrate what their lives were like compared to the royal family. It allows you to see the stark difference between the most privileged and the average citizen in Russia at the time. The author also includes a few pieces of information that were quite new to me, like how the education of the Romanov children was quite lacking in quality (I assumed that being royalty, they would've had the best tutors available).

Recommendation:
Extremely well-researched and written account of this time in Russian history that also includes accounts of the lower classes from the same time period.

Thoughts on the cover:
I like how they included my favourite picture of the Russian royal family, as well as a picture of peasants towards the bottom, very true to the theme of the book.
Posted by Andrea at 8:27 PM