An Ember in the Ashes - Sabaa Tahir 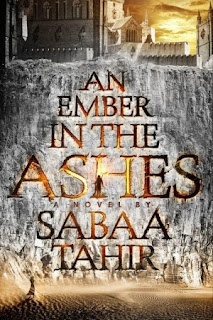 Laia is a slave. Elias is a soldier. Neither is free.

Under the Martial Empire, defiance is met with death. Those who do not vow their blood and bodies to the Emperor risk the execution of their loved ones and the destruction of all they hold dear.

It is in this brutal world, inspired by ancient Rome, that Laia lives with her grandparents and older brother. The family ekes out an existence in the Empire's impoverished backstreets. They do not challenge the Empire. They've seen what happens to those who do.

But when Laia's brother is arrested for treason, Laia is forced to make a decision. In exchange for help from rebels who promise to rescue her brother, she will risk her life to spy for them from within the Empire's greatest military academy.

There, Laia meets Elias, the school's finest soldier - and secretly, its most unwilling. Elias only wants to be free of the tyranny he's being trained to enforce. He and Laia soon realize that their destinies are intertwined - and that their choices will change the fate of the Empire itself.

Review:
This book has received so much hype not only from publishers, but from other authors as well, so I figured I needed to pick it up. It didn't completely wow me like I expected (the danger of too much hype), but it was quite entertaining and well worth the read.

The Martial Empire rules a land that was once ruled by the Scholars, who are now enslaved. Centuries later, prevented from even learning how to read, the descendants of the Scholars are mostly slaves to the Martials. Laia's family is free, but constantly in fear for their lives, especially considering Laia's now deceased parents were the leaders of the Scholar resistance. When her older brother, Darin, is captured, and her grandparents murdered, Laia tracks down the resistance and begs them to help her brother. They agree, but only if Laia agrees to spy on them from within Blackcliff, the military academy where the Martials brutally train children as young as six, where the new Emperor will be chosen from. As Laia tries to uncover the mysteries of Blackcliff, Elias is trying his best to escape it. Son of the Commandant, he is favoured as a candidate for Emperor (something he himself wants least of all), but as the trials continue, Elias struggles to maintain his soul and sense of morality in such a brutal place.

I loved the world building and set up here, the author did a great job with creating a world similar to ancient Rome but quite unique unto itself (I never would've pegged this world as Rome-like until I read the blurb). The book lagged a bit in the beginning until the action moved to Blackcliff, I loved the school setting purely because all the action and blood was there. The Commandant was amazing as the antagonist, and I loved Elias and Helene as characters. Laia fell a bit flat for me as a character, purely because she was really naive and took a while to clue in to things, but she's spunky, so she was redeemed a bit.

I was not a big fan of the love octagon going on here. Not only did we have girls falling over Elias, we had boys falling over Laia, plus crossover, it was a bit much. Males and females can be in contact with each other and just be friends without wanting to rip each other's clothes off, I'm not sure why this fact is so rare in YA books. This next bit wasn't a downside for me personally, but I can see where it could for some readers: there is a lot of violence, gore, blood, plus numerous threats of rape; sensitive readers beware.

Recommendation:
Very worth the read, plus there is a sequel in the works, so the unanswered questions from this book will hopefully be resolved in the next instalment.

Thoughts on the cover:
It's gorgeous, I'll leave it at that.
Posted by Andrea at 3:20 PM