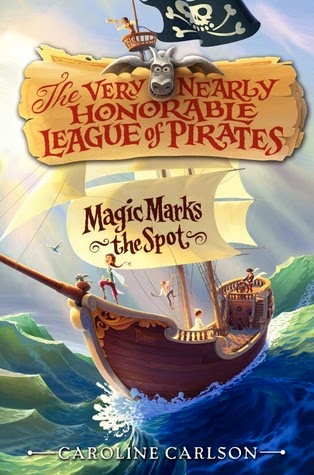 Hilary Westfield has always dreamed of being a pirate. She can tread water for thirty-seven minutes. She can tie a knot faster than a fleet of sailors. She particularly enjoys defying authority, and she already owns a rather pointy sword. There's only one problem: The Very Nearly Honorable League of Pirates refuses to let any girl join their ranks of scourges and scallywags.

Girls belong at Miss Pimm's Finishing School for Delicate Ladies, learning to waltz, faint, and curtsy. But Hilary and her dearest friend, the gargoyle, have no use for such frivolous lessons - they are pirates! (Or very nearly.)

To escape from a life of petticoats and politeness, Hilary answers a curious advertisement for a pirate crew and suddenly finds herself swept up in a seafaring adventure that may or may not involve a map without an X, a magical treasure that likely doesn't exist, a rogue governess who insists on propriety, a crew of misfit scallywags, and the most treacherous - and unexpected - villain on the High Seas.

Will Hilary find the treasure in time? Will she become a true pirate after all? And what will become of the gargoyle?

Review:
I heard the first chapter of this when I was teaching a junior class and the school librarian was reading it to them. She thankfully told me the name of the book so I could find it and read the rest at home.

Hilary lives in the land of Augusta and is the daughter of Admiral Westfield. The upper class that her father holds a prestigious position in abhors piracy, but that doesn't stop Hilary from wanting that as her destiny instead of the dainty, sheltered life as a refined lady that her parents would rather have for her. But when the Very Nearly Honorable League of Pirates rejects her application and she is forced to attend Miss Pimm's school, she has to be creative and daring if she wants to achieve her dream.

This is a wonderful adventure story in the vein of classic tales, made even better by the fact that the protagonist is a strong, smart female. Hilary doesn't stick to traditional gender roles and advocates for herself, so she makes my list of a good role model for all kids, but particularly for young girls. The novel's language is slightly more advanced than your average middle grade book, which makes for a great challenge for younger readers. The gargoyle is admittedly my favourite, he brings a lot of comic relief and his conversations with Hilary are quite witty and enjoyable.

Recommendation:
A story kids will enjoy (who doesn't love a good pirate story?), especially for the humour and the awesomeness that is Hilary.

Thoughts on the cover:
I like it, it's nice and dynamic, though I wish the characters on the ship were bigger with more detail. I like how they managed to work the gargoyle into the logo.
Posted by Andrea at 10:14 PM