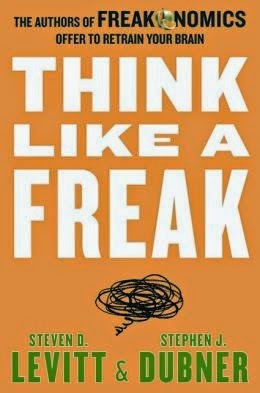 The New York Times bestselling Freakonomics changed the way we see the world, exposing the hidden side of just about everything. Then came SuperFreakonomics, a documentary film, an award-winning podcast, and more.

Now, with Think Like a Freak, Steven D. Levitt and Stephen J. Dubner have written their most revolutionary book yet. With their trademark blend of captivating storytelling and unconventional analysis, they take us inside their thought process and teach us all to think a bit more productively, more creatively, more rationally - to think, that is, like a Freak.

Levitt and Dubner offer a blueprint for an entirely new way to solve problems, whether your interest lies in minor lifehacks or major global reforms. As always, no topic is off-limits. They range from business to philanthropy to sports to politics, all with the goal of retraining your brain. Along the way, you'll learn the secrets of a Japanese hot-dog-eating champion, the reason an Australian doctor swallowed a bunch of dangerous bacteria, and why Nigerian e-mail scammers make a point of saying they're from Nigeria.

Some of the steps toward thinking like a Freak:

Levitt and Dubner plainly see the world like no one else. Now you can too. Never before have such iconoclastic thinkers been so revealing - and so much fun to read.

Review:
I read the first Freakonomics book (but not the second) years ago and loved it, so of course I picked up this for a fun read. The book is an ode to thinking outside the box, and some of the examples here will definitely have you giving the book the side-eye...not sure if anyone else does that to their books or if it's just me...

The one downside is that they do re-hash some concepts from previous books. I didn't read the second book so I'm not sure if they recycled more than what I recognized from the first book. That doesn't really detract from the overall enjoyment, but I thought I'd throw that out there.

So in addition to the general Freakonomics ideas like incentives rule the world, and correlation does not equal causation, there are some really interesting concepts that the authors talk about in this instalment. One is the idea of weeding people out (getting people to reveal their guilt through their own behaviour, using strategies to prey upon the gullible etc.) The examples they give to illustrate this are of the Biblical King Solomon and the women's dispute over the baby, Van Halen specifically requesting no brown M&Ms while on tour, and Nigerian e-mail scammers.

I adore the part where they talk about the three hardest words in the English language are "I don't know", because it's so true, and the need to be able to admit when we don't have enough information to give a proper answer. I thought the idea behind Smile Train's "once and done" way of soliciting donations was groundbreaking, very simple yet so ingenious. And the section where a doctor proves how ulcers are really caused by swallowing a jar of bacteria was crazy yet correct. There are lots of side-stories and examples used to complement their main ideas, giving the book a nice quick pace. And as a bonus, I now have a soccer example from the book I can use to illustrate an existing idea I like to refer to as, "if you're going to fail, fail spectacularly". The authors use the soccer analogy to elaborate on why soccer players don't kick towards the dead centre of the net on a penalty kick even though statistically that's the best odds of making it.

Recommendation:
A quick, entertaining, and enlightening read; definitely worth a trip to the library.

Thoughts on the cover:
The little Freakonomics apple-orange hybrid is up at the top, and the cover incorporates a mostly orange cover with green font at the bottom, so the Freakonomics trademarks are easily recognized here.
Posted by Andrea at 2:53 PM