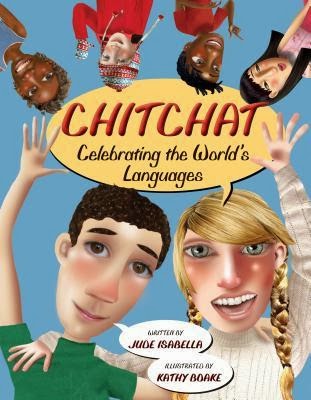 We humans chitchat away in 7000 world languages. But how did language come to be? Why can we speak, while cats and dogs can't? When, how, and where did our alphabets come from? Chitchat looks at languages - spoken, written, and signed - to find out where they came from and how they're changing.

Review:
I'm a big language buff, so a kid's linguistics book (simple though it may be) really intrigued me.

This book is a very basic introduction, covering the fundamentals plus some really fun information in a way that will appeal to kids. Each two-page spread covers a different topic, from how languages developed and what language families are, to how languages become extinct and how new words enter into our vernacular. There's cool little activities every few pages, like trying to identify the correct meaning of Japanese words based on the sounds alone, and even a description of how Cockney slang works (that was really enlightening). The illustrations are quirky and appealing, and help visualize key concepts.

Recommendation:
A really great read if you're a language teacher or just want something on the subject for your kids or students. It's pretty basic in terms of what it covers, but it might be a starting point for some kids for research or general interest.

Thoughts on the cover:
I'm not crazy about the illustration style, but I can see how it's appealing to kids. I do like the multicultural aspect, but it would've been nice if there could have been a person of colour as one of the bigger figures on the bottom of the cover rather than tiny and upside down in the corner.
Posted by Andrea at 7:54 PM