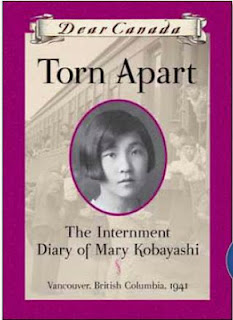 The harsh conditions of an internment camp become reality for a young Japanese-Canadian girl.

It is 1941 and Mary Kobayashi, a Canadian-born Japanese girl enjoys her life in Vancouver. She likes school, she likes her friends, and she yearns above all else to own a bicycle. Although WWII is raging elsewhere in the world, it hasn't really impacted her life in British Columbia.

Then on December 7, 1941, Japan bombs Pearl Harbor...and everything changes.

Suddenly a war of suspicion and prejudiced is waged on the home front, and Japanese-Canadians are completely stripped of their rights, their jobs, and their homes. Mary is terrified when her family is torn apart and sent to various work camps, while she and her two sisters are sent, alone, to a primitive camp in B.C.'s interior. Here Mary spends the duration of the war, scared and uncertain of how it will all end.

In Torn Apart, author Susan Aihoshi draws from the experiences of her own family during "The Uprooting" of the Japanese in B.C. during WWII. Through young Mary's eyes, readers experience this regrettable time in Canadian history firsthand.

Review:
Ever since I started reading the Dear Canada books back when I first started teaching, I hoped more than anything that some Canadian author would write one on Japanese-Canadian internment. I did a huge project on the subject when I was in high school, and to this day I'm amazed that it isn't covered more in our history curriculum (our kids know a fair bit about the Holocaust and concentration camps, but have no idea that Canada interned various ethnic groups during the wars).

Mary's diary begins on her twelfth birthday in the spring of 1941, outlining her life with her family in Vancouver. She goes to school, has fun with her friends, and loves going to Guides. Her parents have lived in Canada for 25 years and like most immigrant parents, they do a wonderful job of raising their 6 children with the best of both cultures. Living in a multicultural neighbourhood that includes other Japanese families, they don't really feel the effects of prejudice and racism until the bombing of Pearl Harbor, when Canada invokes the War Measures Act to infringe on the rights of all Japanese-Canadian citizens regardless of status (landed immigrant vs. Canadian-born). Mary's grandfather is sent away first, then Mary's father and older brother are sent to different work camps (her other older brother voluntarily leaves for Ontario). Mary and her older sisters are sent to yet another camp, while her mother and younger brother follow later. This is after they are forced to leave their jobs, home, and most of their possessions to live in the camp's primitive conditions.

The book was an equal mix of showing life in Vancouver and life during the camp. Mary's diary ends after only a few months in the New Denver camp, so it would've been nice to see more there, but the author ties up everything nicely in the afterword.

Recommendation:
A wonderful piece of historical fiction on a subject not often explored, I'm so glad this book finally exists after many years of waiting. This is full of teachable moments from the bullying Mary gets from Billy in school to the examples of the injustice suffered by all Japanese-Canadians.

Thoughts on the cover:
Another good job in true Dear Canada cover fashion.
Posted by Andrea at 8:40 PM