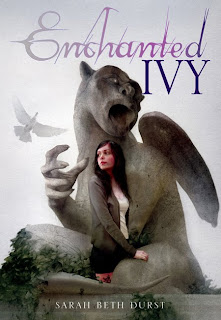 Summary:
From the inside cover:
What Lily Carter wants most in the world is to attend Princeton University just like her grandfather. When she finally visits the campus, Grandpa surprises her: She has been selected to take the top-secret Legacy Test. Passing means automatic acceptance to Princeton. Sweet! Lily's test is to find the Ivy Key. But what is she looking for? Where does she start? As she searches, Lily is joined by Tye, a cute college boy with orange and black hair who says he's her guard. That's weird. But things get seriously strange when a gargoyle talks to her. He tells her that there are two Princetons—the ordinary one and a magical one—and the Key opens the gate between them. But there are more secrets that surround Lily. Worse secrets.When Lily enters the magical Princeton, she uncovers old betrayals and new dangers, and a chance at her dream becomes a fight for her life. Soon Lily is caught in a power struggle between two worlds, with her family at its center. In a place where Knights slay monsters, boys are were-tigers, and dragons might be out for blood, Lily will need all of her ingenuity and courage—and a little magic—to unite the worlds and unlock the secrets of her past and her future.

Review:
After picking up Ice by the same author a year ago, I knew I liked her style, and although I had my issues with Ice, I knew I wanted anything else she wrote. Boy, am I pleased that I followed through on that, because I adored Enchanted Ivy.

I have so much love for this book it's amazing, I think this novel would be one my all-purpose "I would bring it to a desert island as my only means of entertainment" book, it's that good. This is partly because so much of it rings true with me. This book takes place at Princeton University and deals with a second, magical Princeton modeled after the human one. Lily discovers gates that lead to the magical realm and back, talking gargoyles, flying dragons, shape-shifting tigers....needless to say the whole premise hooked me immediately. I went to a university that was older and well-established, not quite as famous as Princeton, but still quite nice. My school had the same older style architecture with lots of gorgeous stone work (and some gargoyles too), not to mention a special stone gate that my friends and I always thought was special (we even took our grad pictures in front of it). In between stressing out over essays, grad school applications, and grades, (not to mention meeting my future husband in third year) I used to fantasize about the older part of the campus being a gateway to another world where I didn't have to grade a stack of papers well into the night. So when I say I have fond memories of my university years, I really mean it. Hence why Enchanted Ivy is so amazing for me: it takes that geeky love of a place, especially a university, and actually does a good job of conveying those emotions to a reader. You can tell the author really loves Princeton even without reading the acknowledgements.

Now on to the specifics of the book. I loved Lily, she reminded me a lot of myself at that age: wanting to go to a school because it was a family tradition, planning your life around your education so much you'll do anything to achieve it, and really not knowing what to do when someone throws a wrench in your life plans (my wrench was my husband, so his messing around in my life plans was a welcome one). Lily knows what she wants and has her loyalties. She loves her grandfather and her mom, and it was nice to see a character really attached to their family in a healthy way. Even when the boys come into the picture she still has her priorities and doesn't just go all googly-eyed over them. I think my favourite part was when Tye and Jake were arguing and Lily decides to tie them up to stop their fighting and just continue on her own, I kept thinking, "now that's more like it, a girl who'll say to the boys fawning over her, 'you're acting like idiots, I'm outta here!' "

On the subject of the love triangle, I was pleased to see that there wasn't much of one. Anyone who reads my reviews knows I hate them, girls know exactly who they want and I'm convinced they just put off choosing one over the other because they like the attention (cause really, who doesn't like being fawned over by cute boys?). Jake and Tye are both options for her, but Lily knows who she wants and as such there isn't much emphasis on that aspect of the plot, thank god. The romance was more sweet and fluffy than anything, so no concerns over content in that area. Tye is charming and cute, Jake is idealistic and cute, there's not much to hate about these boys...that, and they're great at bickering with each other, it's hilarious.

I liked how the author opened up with Lily's mother's mental health issues and managed to actually work that into the plot of the novel. I would have liked some more focus on that since it was an issue that was well addressed, but what the author did do with it works fine as is.

The plot is kind of predictable, but that's not an issue since everything moves along so quickly that you don't really have time to get frustrated with it.

The author's writing is very accessible, the language in the book is colloquial (normal teen speak), and there's a good balance between just enough description and too much description (meaning you'll miss things if you try to skim). I would have really liked a little insert map of Princeton just to keep track of all the action (cause I'm bad that way), but the author has Princeton location pictures on her blog, which are pretty cool to see. The book itself is a one-shot and wraps up rather nicely, but there's enough there for a sequel I think, I would love to see more from this book universe.

Recommendation:
I think my review said it all. One of my favorite reads of the year. If you're in the mood for something magical, fun, sweet, and slightly fluffy (with a nice dose of bloody battle on the side), read this! And if you liked this, pick up Ice too (not to mention the author's other novels: Into the Wild and Out of the Wild).

Thoughts on the cover:
Like Ice, this cover is shimmery and pretty. I like the image of Lily in the shadow of the huge gargoyle, but can't figure out if there's a drop-down compartment behind the legs because it looks like she's standing up inside it?
Posted by Andrea at 5:41 PM