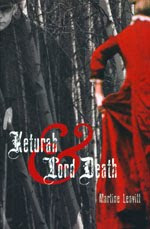 Summary:
From the publisher's website:
Keturah Reeve is a beautiful young woman of sixteen who lives with her grandmother in a cottage near the forest owned by Lord Temsland. Keturah is renowned in the village for her captivating storytelling, and this beautifully woven novel is a response to a request from Keturah's eager audience for yet another of her fascinating tales. She tells of her experience of being lost in the forest, her eventual meeting with a dark figure on horseback who is Lord Death and her bargaining with him for her life-and for the lives of the villagers who are threatened by an onset of the plague.

With its richly textured medieval setting, Keturah's story exposes the tensions and desires of the villagers, the dangers that loom in their future and how they place Keturah's life in jeopardy. Keturah's escalating bargains with Lord Death allow her to protect her friends and reveal to them their true talents and destinies. But even as she negotiates with Death, she becomes more isolated from the people she is seeking to protect and seems less and less likely to achieve the dreams of her own heart.

The startling resolution of the novel confirms Martine Leavitt's reputation as a treasure of a writer, a storyteller who can weave magnificent spells. Leavitt confronts readers with issues and revelations that, while they occur in a setting far from their own experience, bear the intimacy of next door.

Review:
This book confuses me somewhat, but I know I like it.

Keturah is the village storyteller in a medieval England setting and narrates the tale in the novel around the village campfire, sort of a story within a story. Keturah follows a stag into the forest near her home and gets lost. After three days she is aware she will die, and meets Lord Death. A brooding, lonely man on horseback, she finds Lord Death not all she expected him to be. He is enchanted by her and in exchange for a story, he gives her one more day to live and find her true love, and if she cannot she must finish the story and become his queen. This is complicated further by the fact that Lord Death tells Keturah that plague is coming to her village, so she becomes a Scheherazade of sorts, extending the story night by night, playing on Lord Death's love for her and asking to live one more day so as to save her village and find her true love at the same time. It's a wonderfully written tale with a lot of depth if you choose to read into it.

The writing feels like an old fashioned fairy tale, and the dialogue reads like out of one too, which was cool for me. Keturah is clever and admirable and isn't afraid to speak up, especially considering her life is on the line. Lord Death is an interesting character to say the least, flawed and vulnerable, and shows that he does actually love Keturah considering what he does for her. The secondary characters are nice additions to bulk up the story, they play on typical medieval characters and are likable too.

Here there be Spoilers!
The thing that confuses me is the ending combined with the beginning. In the end, Keturah realizes that only in the presence of Death did she truly love her life, and that she was meant to be his companion. I don't have a beef with who she chose, I quite liked that part of the story since it was the opposite of what I expected to happen and it still felt right. What confused me was that since the prologue has Keturah telling this whole story at the village campfire, it didn't really happen then, did it? So then, is the story supposed to be a metaphor of how Keturah accepts that she must eventually die by accepting Lord Death as a lover? I got so caught up in the story that I forgot that Keturah wasn't telling it as it happened, which is easy to do since all the names of the characters are the same as the people she's entertaining at the campfire, so you know these people can't be listening to the story while getting married to each other at the same time.

Recommendation:
I loved this book, even the ending, which some readers might have issues with. It would be interesting to assign this for an English class and see how everyone interprets it. 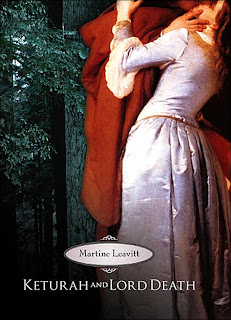 The paperback copy I read has a different cover than the original hardcover. In the paperback copy, the cover depicts Keturah in red off to the right, and you almost don't even see Lord Death in black off to the left because he blends into the trees between them, it's appropriate considering how he is there yet not there in the story. The hardcover copy has Keturah and Lord Death embracing and kissing. I like this one because Lord Death's face is obscured, versus the paperback where you see more of his face but still not enough to really see him.
Posted by Andrea at 7:29 PM