Outside In - Maria V. Snyder 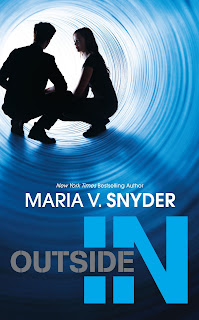 Summary:
From the back of the book:
Me? A Leader?
Okay, I did prove that there's more to Inside than we knew. That a whole world exists beyond this cube we live in. And finding that led to a major rebellion - between worker scrubs like me and the snobby uppers who rule our world. Make that ruled. Because of me, we're free. I thought that meant I was off the hook, and could go off on my own again - while still touching base with Riley, of course. He's the one upper I think I can trust. But then we learned that there's outside and then there is Outside. And something from Outside wants In.

Review:
When I reviewed Inside Out last year, I was pleasantly surprised by how much I liked it. A heavily science fiction based dystopian set of books, Inside Out and Outside In deal with scrubs and Uppers that live in a giant cube known as Inside, and the revolution against the ruling class Travas, led by Trella. After the events of the first book, the revolution has succeeded and Trella has discovered exactly what lies beyond Inside. A newly formed committee tries to keep the peace between the scrubs and Uppers, but with the Uppers not willing to work as hard as the scrubs and the scrubs' resentment towards the Uppers, rebellions soon occur. Then, Trella and company discover that part of the attacks are a result of Outsiders that are trying to invade.

Outside In is essentially similar in vein to the first book. There's a lot less exposition than in the first book, and the whole thing's very focused on plot rather than character development. The plot moves along at a good pace, and there aren't any real slumps where things are considerably boring. The idea that the scrubs and the Uppers can't compromise and work together even after gaining their freedom is an interesting one, which ties into the fact that Trella is afraid to have a bigger role in the committee's actions for fear of making things worse. I liked the focus on the aftermath of the revolution, since most dystopians don't really show you what happens after the fact and how people change the rules and get everyone to cooperate.

Recommendation:
More of a good thing; if you liked Inside Out, you'll like its sequel Outisde In.

Thoughts on the cover:
I don't like this one as much as the first cover, but I do appreciate how they tried to incorporate the feeling of going outside to in like they did with the first cover, just vice versa.
Posted by Andrea at 7:40 PM