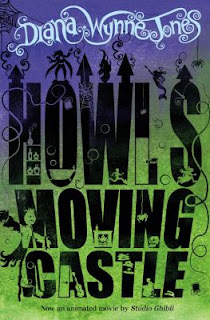 Summary:
From the back of the book:
In the land of Ingary, where seven-league boots and cloaks of invisibility really exist, Sophie Hatter attracts the the unwelcome attention of the Witch of the Waste, who puts a curse on her. Determined to make the best of things, Sophie travels to the one place where she might get help - the moving castle which hovers on the nearby hills. But the castle belongs to the dreaded Wizard Howl whose appetite, they say, is satisfied only by the hearts of young girls...

Review:
I read Howl's Moving Castle eons ago and decided to read it again since the author recently passed away (which is a loss the literary world will mourn).

Howl's Moving Castle breaks down like so: in a world that looks a lot like Victorian-era Europe where witches and wizards exist, Sophie is the eldest of three and set to inherit the family business as a hatter until the Witch of the Waste curses her, turning her into a 90-year-old woman instead of an 18-year-old girl. Trying to find a new situation, Sophie becomes Howl's cleaning lady after bargaining with his fire demon, Calcifer that she will break his enchantment if he'll break hers. So she gets tangled up in Howl's life of multiple personas to match the many places the castle's main door can lead to, masquerading as his mother in front of the King, and cleaning up after the insanely vain wizard.

As much as I love this book for the sheer imagination, setting, world-building, and writing, I still think the Ghibli anime movie version from 2004 is an amazing adaptation, and it's probably one of the only times I'll admit to liking a film version better than the actual book. The changes to the plot make for a much more exciting story with more urgency to it, versus the book version I find is more of a fun romp.

My favourite parts, even after so many years, are Howl's hair-dye incident and his resulting tantrum; and when he catches a cold, he's such a typical crybaby male when he gets sick.

Recommendation:
If you're looking for an amazing fantasy with wonderful characters, unique setting, and excellent writing, read this!

Thoughts on the cover:
I love the cover redesigns that all the author's books got a few years back, these are nice and dynamic and whimsical at the same time.
Posted by Andrea at 6:20 PM