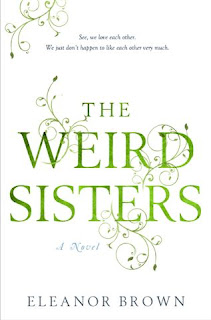 Summary:
From the author's website:
The Andreas sisters were raised on books – their family motto might as well be, ‘There’s no problem a library card can’t solve.’ Their father, a renowned, eccentric professor of Shakespearean studies, named them after three of the Bard’s most famous characters: Rose (Rosalind – As You Like It), Bean (Bianca – The Taming of the Shrew), and Cordy (Cordelia – King Lear), but they have inherited those characters’ failures along with their strengths.

Now the sisters have returned home to the small college town where they grew up – partly because their mother is ill, but mostly because their lives are falling apart and they don’t know where to go next. Rose, a staid mathematics professor, has the chance to break away from her quiet life and join her devoted fiance in England, if she could only summon up the courage to do more than she’s thought she could. Bean left home as soon as she could, running to the glamour of New York City, only to come back ashamed of the person she has become. And Cordy, who has been wandering the country for years, has been brought back to earth with a resounding thud, realizing it’s finally time for her to grow up.

The sisters never thought they would find the answers to their problems in each other, but over the course of one long summer, they find that everything they’ve been running from – each other, their histories, and their small hometown – might offer more than they ever expected.

Review:
This is probably one of the most human, charming stories I've read in a long time, I loved this book.

Rose, Bean, and Cordy are all failures in their own way: Rose is afraid of change and is tied down by the perpetual responsibility of being the eldest and taking care of everyone. Bean was fired from her job and has come home in shame to figure out what to do next. Cordy finds herself pregnant after traipsing around the country like a nomad, so decides to return home to plan her next move as well. The sisters, in their late twenties to early thirties, don't exactly get along well either, but they band together in compromise temporarily when they're all home to help care for their mother who is diagnosed with breast cancer. As each sister suffers her own problems in silence, they each begin to uncover the reasons why the other sisters have come home and the overdue sisterly understanding and bonding kicks in.

This is a book that thrives purely because of the characters, since not much actually happens in terms of plot except for the developments in their mother's illness and Cordy's pregnancy. Each sister has a completely developed personality that's wonderfully explored with plenty of quirky anecdotes from the past, and how they interact with each other is hilarious. I loved how their dad was a Shakespeare prof and named them after heroines from the plays, not to mention their family way of communicating in random quotes from the plays that relate to what they're discussing. I also liked how each sister was messed up in ways that were believable: Rose is afraid to leave the familiar despite being well into her thirties, which eerily reminded me of a friend of mine. Bean has screwed up royally but got lucky, and doesn't know what direction to take next. Cordy is pregnant and barely feels able to take care of herself and decides she needs to finally grow up at the age of 27. Each sister finds closure in their own problems by helping each other, as well as picking up the slack regarding their mother's care, so the book is not so much about the end result (you know things will end well), but more about the journey it takes to get there.

Recommendation:
Utterly charming. If you're looking for a character-driven read that's heartwarming and soul-searching, read this!

Thoughts on the cover:
Kinda boring, but then again it is an adult cover, they're not exactly known for being dynamic. I do like the shade of green used for the title font and the vines growing out of it.
Posted by Andrea at 5:14 PM