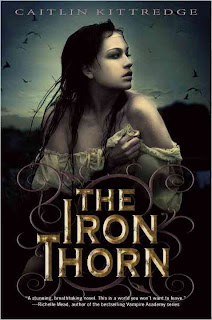 Summary:
From the inside cover:
In the city of Lovecraft, the Proctors rule and a great Engine turns below the streets, grinding any resistance to their order to dust. The necrovirus is blamed for Lovecraft's epidemic of madness, for the strange and eldritch creatures that roam the streets after dark, and for everything that the city leaders deem Heretical—born of the belief in magic and witchcraft. And for Aoife Grayson, her time is growing shorter by the day.
Aoife Grayson's family is unique, in the worst way—every one of them, including her mother and her elder brother Conrad, has gone mad on their 16th birthday. And now, a ward of the state, and one of the only female students at the School of Engines, she is trying to pretend that her fate can be different.
Her future seems bleak. Until one day she receives a letter that reads simply: Find the witch's alphabet. Save yourself.
Aoife knows the letter is from Conrad, but the last time she saw her brother was the day he lost his mind and attacked her before going on the run from the Proctors. Could it be that he is sane somewhere and warning her to get out while she still can-or is the note simply a message from a rambling madman?
To save herself, Aoife must find her brother. And to do that, she must leave Lovecraft and venture into a world of Heretics and air pirates, night creatures and dark family secrets...before thr clock winds down, and she too succumbs to the necrovirus.

Review:
An alternative, dystopian, steampunk 1950s world, complete with fairies and magic...this book is nothing if not ambitious. The plot intrigued me: a virus that causes madness, a girl trying to change her own fate, all wrapped up in 3 different genres, I was set. Unfortunately the book just didn't grab me. Flat characters, writing that takes forever to get to the point, and the book being far too longer than it needed to all made this read more tedious than enjoyable.

Aoife (which is a really awkward name that took a lot of getting used to) is nearing 16 and that very fact worries her. Her mother went mad at 16 and has spent the years since then in various asylums. Her brother Conrad shared the same fate and Aoife hasn't seen him since her tried to cut her throat and ran from the Proctors two years ago. When the academy where she is studying Engineering expels her just before her birthday, Aoife receives a letter from her brother that instructs her to go to their father's estate, called Graystone. There she will find the answers that will allow her to save both her brother and herself from the madness that threatens to consume her.

It was interesting how the author melded three genres into one. I've seen dystopian and steampunk together before, but never with fantasy elements like magic and fairies as is done here. Although it was admirable to see the attempt, the ensuing plot was fairly predictable, taking cliche elements from each of the three genres and combining them...it didn't take a rocket scientist to figure out where things were headed. The characters, especially Aoife, weren't very well developed. Cal was to a certain extent, but after a while Aoife and Dean become more of a focus rather than Cal, and they were so flat that I thought it would be more interesting if Aoife did descend into madness because at least then I'd get some sort of reaction out of her. For a book that's nearly 500 pages long with a plot that in my opinion was fairly simplistic once it got going, the writing gets to the point of verbal diarrhea at times. There were sections where I skimmed pages at a time and didn't miss much. I prefer books where you can't skip a single sentence because every word is carefully chosen and so loaded with meaning. This was not one of them. If the writing had been more concise, the book could've probably been cut by at least a hundred pages or so, which would've been a lot less tedious in the long run.

Recommendation:
Didn't absolutely hate it, but didn't fall in love with it either....not quite sure what to make of it except for the fact that it tested my patience.

Thoughts on the cover:
I don't get this cover. Aside from being all moody and dark and such, it doesn't have much to do with the story. This cover image depicted here is slightly different from the actual cover in that Aoife's peasant top/shirt is higher up on her shoulder in the actual cover, but her right hand is still clasped as if she's trying to hold her shirt up. I don't know why the initial image had her shirt halfway off her shoulders, it doesn't really have anything to do with the story, and the sexualized image where it needn't be is probably why it was changed.
Posted by Andrea at 2:39 PM