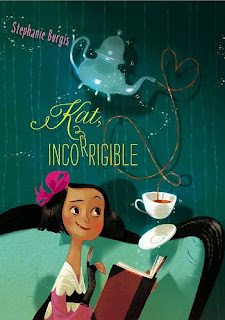 Summary:
From the author's website:
At twelve years old, any proper young lady should be sitting quietly at home, practicing her embroidery, learning French, and keeping her mouth closed and her opinions to herself.

But Kat Stephenson is no ordinary young lady.

Kat's father may be a respectable vicar, but her late mother was a notorious witch, her brother has gambled the whole family into debt, and Kat herself is the newest target of an ancient and secretive magical Order.

Now Kat's ready to do whatever it takes to win all three of her older siblings their true loves, even if she has to battle highwaymen, practise magic, and break all of Society's rules along the way.

Review:
In a nutshell, think of Kat, Incorrigible as Pride and Prejudice for the younger set, with a sprinkling of magic added.

It's 1803 in England, and Katherine (Kat) Stephenson and her family are in trouble. Her older brother Charles has gambled the family into ruin, prompting their stepmother to marry off eldest sister Elissa to a rich suitor despite the scandalous gossip surrounding him. Kat's other sister Angeline has found her way into their late mother's magic books, performing dangerous love spells to deliver her escape from the family's situation. When Kat discovers she is the heir to her mother's pure magical talent, not the witch magic her mother practiced, she is wary to say the least. Reluctant to apprentice to the Order that expelled her mother, she tries to avoid the Order's representatives while trying to arrange unions of true love for her siblings. Obviously Kat does this without any regard to propriety and ladylike behaviour, a great contrast to her stepmother and older sisters, which is the reason why this book is so charming.

Kat, Incorrigible abounds with witty dialogue due to the setting. Regency-era England is a wonderful time period for vocabulary and dialogue, and the author proves herself excellent in this area. Kat is the main reason for me liking the book, since the whole plot concept of marrying off older sisters purely for money to save the family is one I never tolerated, however historically accurate, hence my dislike for pretty much anything Jane Austen wrote. People that are Austen fans and want their daughters to share the love will want to pick this up purely for that reason, it's seriously Austen-esque. Even if you're not an Austen-type enthusiast, this book is worth picking up purely because of Kat. She's feisty, wants to do the right thing regardless of propriety, and isn't afraid to tell people when they're acting like idiots. The whole magic element doesn't play in as much as I thought it would, it's more Kat interacting in social situations with literally a sprinkling of the magic sub-plot, hence why I think of this as historical fiction as well as fantasy. I'm assuming the magic will play more of a role in the future books. Since this was previously published in the UK, the second book is due out in the UK this summer, whereas we won't see it here domestically until Spring 2012, so if you're a fan, look into picking these up via Amazon.uk or The Book Depository to avoid the extra wait.

Recommendation:
Jane Austen for the kiddies with magic injected. If you're not an Austen fan, you'll still want to give this a read purely because Kat is an awesome character.

Thoughts on the cover:
Super charming, I love the art style. Although Kat doesn't actually pour tea like that in the book (it's actually something that their mother was said to have done), it's a good illustration of the magic element. Elissa and Angeline are supposed to be pictured on the back cover at the other end of the settee; hopefully they do make it to the final cover because the whole image from back to front cover is quite nice.
Posted by Andrea at 9:06 AM