Inside Out - Maria V. Snyder 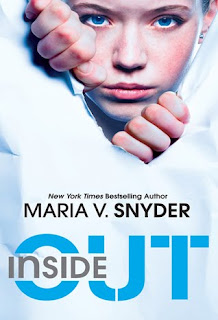 Summary:
From Amazon.com:
Keep Your Head Down.

I'm Trella. I'm a scrub. A nobody. One of thousands who work the lower levels, keeping Inside clean for the Uppers. I've got one friend, do my job and try to avoid the Pop Cops. So what if I occasionally use the pipes to sneak around the Upper levels? The only neck at risk is my own…until I accidentally start a rebellion and become the go-to girl to lead a revolution.

Review:
Most of the reviews I've read on this book are very much "love it" or "hate it", no middle ground. Thankfully, I'm of the "love it" crowd. I can fully see why some people wouldn't like this book right off the bat: Trella's very prickly and a loner, not an immensely likable character; and Trella spends the first 100 pages or so traipsing around in the environment of Inside, which is kind of confusing at times (I could picture it a lot better once I drew a map). Luckily for me, I like my characters snarky and prickly, and once I realized that Inside is basically a very large office building that's shaped like a cube, things became a lot clearer. I liked Trella right away, hiding out in the pipes above the overcrowded lower levels trying to escape the smells of her fellow scrubs. It's a similar story to a lot of other dystopian fiction books: character and world they live in are introduced, problem with people in charge is introduced, journey to solve problem ensues, other bigger problem presents itself at the end. There are two issues going on in Inside Out: the scrubs and the Uppers both want freedom from the ruling Travas, and Trella and some scrubs (and eventually Uppers) investigate the possibility of Outside, a world that can't exist in Trella's mind since she's grown up thinking that Inside is all there is. One other element that runs through Inside Out is the idea that people are social animals and need each other. Trella finds it very hard to trust other people until very late in the book, and the Uppers and scrubs are devoid of real relationships outside their families (and scrubs barely even have that) due to paranoia and propaganda. Riley, an Upper, comes into play when he comes across Trella in his workroom and doesn't report her, earning her trust eventually and becoming her partner in crime. Probably the best thing Riley does is introduce Sheepy...that will make a lot more sense once you read the book, but trust me, you will love Sheepy.

The writing is excellent, the plot flows very well, and there is the existence of an over-arching plot to keep the reader's interest beyond the initial book in this series. The world-building is done well and is very detailed (the jobs, the work schedules, the rules etc.). The ending will blow you away, I didn't expect it at all, and will make you wish for the next book to see what Trella and the others do with the information they learn. Again, the only thing I can see being an issue for some people is Trella's pipe-crawling and the descriptions that go with it, it might turn some people off the book if they don't have the patience to get past those first 50 or so pages until the plot really grips you.

Recommendation:
If you're looking for a really good example of dystopian fiction with a real sci-fi influence, read this! If you would like some visuals to help you get past the first few pages, the author has some maps for Inside Out on her website, or you can just draw one yourself.

Thoughts on the cover:
I like it, it really plays on title, very clever. I like how they used Trella's new blue eyes as the only colour that stands out on the cover (aside from the blue in the title).
Posted by Andrea at 4:42 PM