All You Get Is Me - Yvonne Prinz 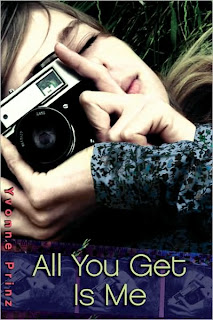 Summary:
From the inside cover:
A summer of love, loss, and justice.

Things were complicated enough for Roar, even before her father decided to yank her out of the city and go organic. Suddenly, she’s a farm girl, albeit a reluctant one, selling figs at the farmers’ market and developing her photographs in a ramshackle shed. Caught between a troublemaking sidekick named Storm, a brooding, easy-on-the-eyes L.A. boy, and a father on a human rights crusade that challenges the fabric of the farm community, Roar is going to have to tackle it all—even with dirt under her fingernails and her hair pulled back with a rubber band meant for asparagus.

Review:
When I read The Vinyl Princess by the same author last summer, I loved it to pieces, so picking up her new title was a no brainer.

Aurora, called Roar, already has had to deal with her mom abandoning the family and her dad deciding to move to the country to become a farmer. This summer starts out with Roar and her dad witnessing a car accident where an illegal immigrant was killed, leaving behind a husband and child. Roar's dad, a former human rights lawyer before turning farmer, decides to take on an unprecedented case where an illegal immigrant sues a US citizen for wrongful death. Then Roar happens to fall for the son of the woman responsible for the crash, which complicates things further....not to mention how the farming community is all up in arms about her dad's case, so they're receiving threats as well.

I didn't love this book as much as Vinyl Princess, but purely because of the subject matter. The book is still wonderfully written, and the characters are quirky, but the plot just didn't grab me. I liked the subplot about Roar's mom, but the whole thing with the illegal immigrant workers and the trial and the forbidden love thing with Forest just didn't make an impression. Maybe it's because we don't have illegal immigrants in Canada....well we do, just not to the extent that the States does. We have issues with people resenting legal immigrants for taking away jobs and such, but most people are aware that the jobs that our legal immigrants do are jobs no one else wants and therefore no one has the right to complain. So all these issues about illegal vs. legal citizens in the book didn't make a lot of sense to me because people here wouldn't have an issue with an immigrant sueing someone for the wrongful death of his spouse, so it's probably just a mindset difference. I have a feeling that people that lived in or are familiar with southern California would get a lot out of this book: the farming, the hippy qualities, the all-natural lifestyle, I'm sure the author did it justice, but again, not something I can appreciate from growing up in an ethnic area of Ontario where vegetarians still aren't all that common.

Recommendation:
Not my cup of tea plot-wise, but still a very entertaining book. There's a little bit of sexual content (Roar does lose her virginity), but even though it's not explicit that might be an issue for some.

Thoughts on the cover:
I love how they pictured Roar with her camera, it's a very natural pose, very appropriate for the book.
Posted by Andrea at 1:36 PM