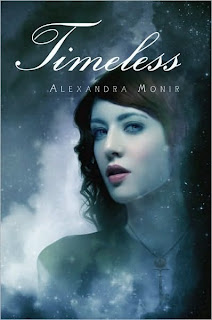 Summary:
From Goodreads.com:
When tragedy strikes Michele Windsor’s world, she is forced to uproot her life and move across the country to New York City, to live with the wealthy, aristocratic grandparents she’s never met. In their old Fifth Avenue mansion filled with a century’s worth of family secrets, Michele discovers a diary that hurtles her back in time to the year 1910. There, in the midst of the glamorous Gilded Age, Michele meets the young man with striking blue eyes who has haunted her dreams all her life – a man she always wished was real, but never imagined could actually exist. And she finds herself falling for him, into an otherworldly, time-crossed romance.

Michele is soon leading a double life, struggling to balance her contemporary high school world with her escapes into the past. But when she stumbles upon a terrible discovery, she is propelled on a race through history to save the boy she loves – a quest that will determine the fate of both of their lives.

Review:
I have to admit, this book surprised me in a good way. I honestly didn't think I would like it at all, and went into it expecting the worst. Granted, I wasn't completely blown away by it and I still have issues with certain things, but all in all I have to say it's an entertaining novel that I'll definitely be picking up the sequel to.

Michele and her mother Marion live a bohemian lifestyle in California. When her mother dies in a car accident, Michele is sent to live with her mother's parents in New York City. Her grandparents are the Windsors, one of the oldest and richest families in the city, and Michele has never met them before. While trying to adjust to life as a blue blood and coming to terms with her mother's death, Michele discovers a key that accompanies an old diary that belonged to a previous Windsor girl named Clara in 1910. The key and diary allow her to travel back in time to 1910 where she meets her female ancestor as well as Philip Walker, a boy with blue eyes that she's dreamed about for years. When Michele and Philip begin to fall in love, they must come to terms with what their relationship means and how, if at all, they can make it work.

First off, the things that bugged me about the novel. The time traveling was strange, Michele could only go back in time if she had an object relating to the year or the specific date (the diary entries, Lily's record albums, letters, etc.) I'm pretty sure this was created to conveniently fit into the plot, but oh well. Also, when Michele travels back in time she can only be seen by Philip and whatever female ancestor is around her age during that time....which made no sense at all. Again, it seems to exist purely to work conveniently into the plot, but it still didn't make much sense. The romance between Philip and Michele happened a little too quickly, but there was a fair bit of build-up so I could see how they could get to that point. Also, Philip didn't act like a well-bred boy from 1910 at all, so suspension of disbelief didn't happen there.

On to what I liked. I loved how the author had Michele travel to 3 distinct time periods: 1910s, 1920s, 1940s. The history behind each time period was well explored and I was really satisfied with what Michele had to learn/accomplish in each time period. I liked the music aspect: Michele writes lyrics, Philip composes, Lily sings, you could tell the author has music in her background since the characters speak so passionately about it. Though some people I'm sure would disagree with me, I kinda liked how the romance between Philip and Michele progressed and how it was resolved (not going to say more due to massive spoilers). Granted this all led to the most infuriating cliffhanger ending of all time, so needless to say, I'll be needing the sequel.

Recommendation:
A book about time traveling and history that pleasantly surprised me. Huge cliffhanger ending, so you might want to keep in mind from the get-go that there will be a sequel.

Thoughts on the cover:
Eh, your typical YA cover with a girl on it...the curve of her shoulder really bugs me for some reason. I do like the back cover with who I'm assuming is Philip looking up at the moon.
Posted by Andrea at 4:25 PM