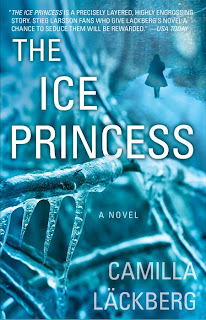 Summary:
From the back of the book:
In this electrifying tale of suspense from an international crime-writing sensation, a grisly death exposes the dark heart of a Scandinavian seaside village.
Erica Falck returns to her tiny, remote hometown of Fjallbacka, Sweden, after her parents' deaths only to encounter another tragedy: the suicide of her childhood best friend, Alex. It's Erica herself who finds Alex's body-suspended in a bathtub of frozen water, her wrists slashed. Erica is bewildered: Why would a beautiful woman who had it all take her own life? Teaming up with police detective Patrik Hedstrom, Erica begins to uncover shocking events from Alex's childhood. As one horrifying fact after another comes to light, Erica and Patrik's curiosity gives way to obsession-and their flirtation grows into uncontrollable attraction. But it's not long before one thing becomes very clear: a deadly secret is at stake, and there's someone out there who will do anything-even commit murder-to protect it.
Fans of Scandinavian greats Stieg Larsson and Henning Mankell will devour Camilla Lackberg's penetrating portrait of human nature at its darkest.

Review:
I put in a request for this title when I saw it advertised in Shelf Awareness mainly because I figured if I liked Stieg Larsson's The Girl With The Dragon Tattoo, then I might like this one.

Erica is 35 years old and has returned to her small seaside hometown of Fjallbacka to settle her parents estate after their death. Trying to deal with her parents' deaths and her younger sister's abusive marriage is bad enough, but then Erica discovers Alex's body and gets caught up in what ends up being the investigation of her murder (they quickly realize it's not a suicide). There's a ton of subplots going on aside from solving Alex's murder, so there's a lot of material to keep readers from possibly getting bored with the main storyline, and they're all practically related to the building and breakdown of relationships and marriages.

The main plot of the story (Alex's murder) isn't too difficult to figure out, but it's all the subplots which really make the story shine, even though some of those are easy to figure out as well. The story is very dependent on the relationships between the primary and secondary characters actually, and is almost more focused on those than the plot (in that way it's very different from Stieg Larsson's books). If you're a fan of Stieg Larsson and want to explore some more Scandinavian true-crime/mystery novels, you might like this, but be prepared that it is a very different experience: the focus on the relationships more than the plot, it's easy to figure out what's going on, and the nature of the crimes and the motivation behind them are nothing astounding (I guess watching Law and Order and Criminals Minds has desensitized me to the usual crimes and reasons for them). This was still an enjoyable novel nonetheless, and one I'd recommend.

Thoughts on the cover:
It's okay all things considered. A silhouette of Alex laying slack in the bathtub against a black/blue background with some frost effect would have been better though.
Posted by Andrea at 4:00 PM