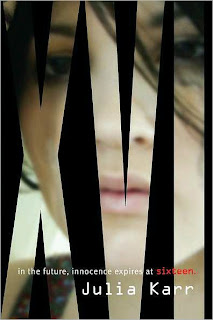 Summary:
From Amazon.com:
Nina Oberon's life is pretty normal: she hangs out with her best friend, Sandy, and their crew, goes to school, plays with her little sister, Dee. But Nina is 15. And like all girls she'll receive a Governing Council-ordered tattoo on her 16th birthday. XVI. Those three letters will be branded on her wrist, announcing to all the world - even the most predatory of men - that she is ready for sex. Considered easy prey by some, portrayed by the Media as sluts who ask for attacks, becoming a "sex-teen" is Nina's worst fear. That is, until right before her birthday, when Nina's mom is brutally attacked. With her dying breaths, she reveals to Nina a shocking truth about her past - one that destroys everything Nina thought she knew. Now, alone but for her sister, Nina must try to discover who she really is, all the while staying one step ahead of her mother's killer.

Review:
I don't know what it is with my dystopian choices this month, but like The Water Wars, XVI is a novel with a really awesome premise and themes but is just poorly executed.

Nina is about to turn 16 and lives in a world where people are grouped into a caste system of tiers and women have few rights. Every girl gets an "XVI" tattoo on their wrist when they turn 16 to signify that they are legal and officially sexually available. The media uses propaganda to make girls want to be a typical "sex-teen", essentially turning teenage girls into whores. With very few options as a low tier-two family to advance themselves, Nina doesn't want to end up in FeLS, a program only for lower tier girls that are still virgins, mainly because nobody knows what happens to those girls after joining the program. When her mother is killed and tells Nina a secret, it unravels everything she knew about her parents and her life. While trying to keep her little sister safe, Nina must also get a message to her father that can make a big difference in their lives.

The premise and themes here are amazing. Nina and her friend Sandy are leered at by men constantly and are asked to show their wrists, you just wonder what would happen if they actually had their tattoos at the points when they were asked, would they be raped, assaulted? Is there any ramification for rape? The idea that the media essentially wants these girls to be oversexed is so close to our reality now it's scary. Girls are targeted with sexual messages at younger ages even now, and XVI just shows us how twisted these practices can be when done in extremes. The girls mention at one point that men have first rights when it comes to their biological children, just one of the many cases where women in this world have had many of their rights removed. It never really says how things got this way, either the lack of women's rights or the tier system, and it would have been nice to know how it all happened and how the justice system got so muddled.

Although the themes are really relevant and thought-provoking, the execution of them left me unsatisfied. The plot threads seem to be thrown together to the point where half the time I didn't know exactly what was going on detail-wise. It also took my forever to figure out that "trannies" meant cars/vehicles....it shouldn't have taken that long to figure out the slang. The world-building wasn't nearly explained enough to make me invested emotionally, as explained above. The characters aren't very well-developed. Nina's mom and grandparents seem very one-sided and almost too perfect, the love interest Sal seemed so flat...even Nina's reactions seemed unrealistic at times, and I could accept that perhaps they would be considering the world she grew up in if I'd been given more information about that world to see how someone would react, all back to the world building.

Thoughts on the cover:
If the girl on the front is supposed to be Nina, she seems too dolled up to be her considering how much Nina rejects those kinds of things.
Posted by Andrea at 11:22 AM