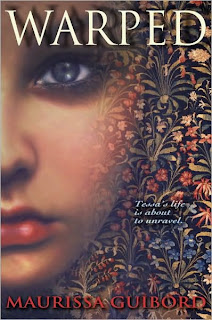 Summary:
From the inside cover:
Tessa Brody doesn't believe in magic. Or fate. But there's definitely something weird about the dusty unicorn tapestry that she discovers in an box of old books. The wild, handsome creature enchants Tessa, and frightens her too.

Soon after the tapestry comes into her possession, strange things begin to happen. Tessa experiences vivd dreams of the past filled with images from a brutal hunt-one that she herself may have played a part in. When Tessa pulls a loose thread from the tapestry, she releases a terrible secret. She also meets William de Chaucy, a young sixteenth-century nobleman with gorgeous eyes, an odd accent, and haughty attitude to spare. Will's fate is inextricably tied to the tapestry as Tessa's is. And though Will might be hard to get along with, he's equally hard to resist.

Together, Tessa and Will must correct the wrongs of the past. But time is running out. The Norn sisters, also known as the Fates, have stepped in and begun to make a tangled mess of Tessa's life. Unless she does their bidding and defeats a cruel and crafty ancient enemy, everything, and everyone she loves will be destroyed.

Review:
I am probably not the best person to review this book because it essentially fits my checklist for an almost perfect fantasy book, incredibly cliched though it may be.

Tessa, the heroine complete with a crazy-weird 'real' name, comes into possession of an old tapestry through an auction that just happened to previously belong to a witch-like character named Gray Lily, who wants her property back. In the meantime, Tessa dreams of a medieval unicorn hunt where a girl that looks eerily like herself is the virginal bait for the mythical creature. Tessa is drawn to the tapestry in ways she cannot explain, and when she pulls a thread from it, she releases the unicorn from his prison...and it turns out he's not really a unicorn at all. William de Chaucy, imprisoned for hundreds of years, must now adjust to Tessa's world while they try to figure out how to avoid the wrath of Gray Lily. Then it turns out Gray Lily has powers she obtained in a less than honest manner, so the Fates (the mythical sisters with the scissors that cut people's threads of life) demand that Tessa defeat Gray Lily or else they will cause her life to crumble around her.

I liked how Tessa had a past life connection with Will, it made their relationship more than just the usual fantasy fare, especially because of the trust issues involved. I got Tessa's character, but Will's fell a little flat, I would have liked to see something more about him, especially about him adjusting to Tessa's world, doesn't matter if he did spend hundreds of years as a unicorn, I don't buy that he adjusted so well to 21st century life without some issues that Tessa might have had to help him with. Same with their romance...it happened a little too fast and I would have liked to see a little more development before they gushed the I love you's.

In spite of all these little annoyances and the cliche storyline, I really enjoyed the book. I'm a sucker for fantasy stories with a 'guy from another time period' element, so I loved Will, although I could've loved him more if he'd been more developed. The inclusion of the Fates sisters and previous lives subplots I think really added to the depth of the story. There's even a unique type of weaving magic in the novel that Gray Lily and Tessa to a certain extent can do. It was really original and I wish the author had given some more detail, especially about Tessa's ability to do the magic.

Recommendation:
Typical fantasy plot at first, but enough originality to make it stand out in the end. Despite my annoyances with some aspects like the romance and character development, I really enjoyed the novel, and I think others will too.