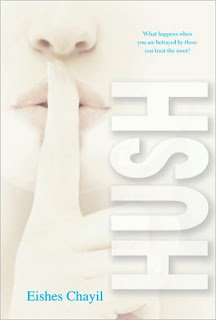 Summary:
From Goodreads.com:
Inside the closed community of Borough Park, where most Chassidim live, the rules of life are very clear, determined by an ancient script written thousands of years before down to the last detail and abuse has never been a part of it. But when young Gittel learns of the abuse her best friend has suffered at the hands of her own family member, the adults in her community try to persuade Gittel, and themselves, that nothing happened. Forced to remain silent, Gittel begins to question everything she was raised to believe.
A richly detailed and nuanced book, one of both humor and depth, understanding and horror, this story explains a complex world that remains an echo of its past, and illuminates the conflict between yesterday's traditions and today's reality.

Review:
Hush is, to say the least, a very powerful novel. Some people have had issues with it because they believe it encourages anti-Semitism based on how the Orthodox Jewish sect is portrayed, but the author never fails to condemn the act and the abusers, not necessarily the community that shelters them, because if there's one thing we know it's that abuse happens everywhere, as well as cover-ups.

Gittel lives in the area of Borough Park in modern day New York where her whole community of Chassidic Jews live. As an orthodox sect, life is very different: everything must be kosher, the kids don't watch tv, boys and girls are separated from an early age, arranged marriages at age 18 are the norm, and families are willing to turn a blind eye in order to save their reputation. The story is narrated via alternating chapters by present-day Gittel as she's about to be engaged and married at age 17/18, and also reminisces back to when Gittel was a child. When 9-year-old Gittel discovers that something horrible is happening to her best friend Devory (but she can't really identify it because the girls are so sheltered sexually that they don't realize what's happening is sexual abuse), she's not really sure how to help her, and all the adults around them ignore or punish Devory for her recent irregular behaviour. When things get even worse and Devory commits suicide, Gittel is devastated. When she tries to explain the reason why Devory did what she did, the adults tell her to keep quiet, mainly so as not to cause more humiliation for Devory's family, and also not to tarnish her own family's reputation. 10 years later, Gittel still suffers from witnessing Devory's sexual abuse and suicide, which affects her ability to have a healthy relationship with her new husband. It is only when she receives some support and finally reveals what she witnessed does she begin to heal.

I think what really makes this book amazing is Gittel's dual perspectives as a child and an adult. Although this book is so haunting, it also made me laugh while reading the chapters with Gittel as a child because the voice is so genuine. As a teacher, I know exactly how kids both big and little think, act, and speak, and this author got it hands down. As far as people complaining that the author is purposefully bashing the Chassidic community, I honestly don't think she's doing that here. Number 1, the author's name is a pseudonym, and explains everything in such detail that leads me to think that she either grew up in a Chassidic community, or still lives in one now. Not that someone that grew up in a certain type of community doesn't end up bashing that community as an adult, but the author also describes the good aspects of the community like Gittel's amazing father. It only shows that the community is just that: a community...you could replace the Chassidic community with any other and the abuse scenario could still happen. In this case the abuse happens to occur in a Chassidic community, but that's just the author's experience so that's what she chose to write about.

One thing I should caution readers about that did bother me a bit. Again, I'm coming at this from a non-Jewish perspective and mean no disrespect, but this story does caution against the blind faith and tradition of religion. The girls' lives revolve around religion to the point where they aren't allowed to do anything that isn't sanctioned. Their skirts must be so many inches below the knee (I'm all for modest clothing but there's a limit), their hair must be covered once they're older (I'm sorry but the hair on a woman's head isn't a sex symbol, it's just hair), they are forced into arranged marriages when they're barely legal, are so sexually sheltered, and if it isn't in their vocabulary it doesn't exist (like sexual abuse). The comments about never trusting a non-Jewish person and that a non-Jew would kill and poison them if given the chance were insulting but more funny at the same time...I teach my students that religion doesn't make or break a person, and that good people can be from all walks of life and a person's personality and actions should dictate whether they are a good person or not...and I teach in a Catholic school. I'm of the mindset that religion sometimes must change with the times, and this book, in addition to exploring the issue of covering up abuse no matter what community it occurs in, also explores the damage done to a person when they are not given the ability and knowledge to think for themselves.

Recommendations:
Haunting and beautiful at the same time, this is an amazing book that needs to be read. The book does deal with rape and suicide of a young child (granted not explicitly), but it's still there, so readers beware.

Thoughts on the cover:
Very simple but very appropriate considering the themes of the story.
Posted by Andrea at 5:44 PM