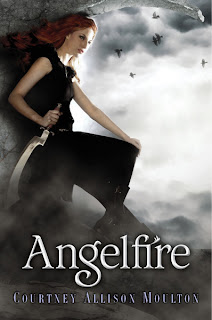 Summary:
From Goodreads.com:
When seventeen-year-old Ellie starts seeing reapers - monstrous creatures who devour humans and send their souls to Hell - she finds herself on the front lines of a supernatural war between archangels and the Fallen and faced with the possible destruction of her soul.

A mysterious boy named Will reveals she is the reincarnation of an ancient warrior, the only one capable of wielding swords of angelfire to fight the reapers, and he is an immortal sworn to protect her in battle. Now that Ellie's powers have been awakened, a powerful reaper called Bastian has come forward to challenge her. He has employed a fierce assassin to eliminate her - an assassin who has already killed her once.

While balancing her dwindling social life and reaper-hunting duties, she and Will discover Bastian is searching for a dormant creature believed to be a true soul reaper. Bastian plans to use this weapon to ignite the End of Days and to destroy Ellie's soul, ending her rebirth cycle forever. Now, she must face an army of Bastian's most frightening reapers, prevent the soul reaper from consuming her soul, and uncover the secrets of her past lives - including truths that may be too frightening to remember.

Angelfire's plot is nothing to write home about, it's pretty standard to the fallen angel thing, but with a few exceptions. Ellie is a fairly normal girl, but on her seventeenth birthday, a mysterious boy that she feels a pull towards awakens her sleeping powers. Will reveals to Ellie that she is a reincarnation of the Preliator, an ancient warrior fighting on the side of the heavens to help smite demons and reapers and the like. Will is her immortal guardian and bodyguard, and has been with her through every incarnation. Super badass reaper shows up wanting to do away with Ellie since she's uber pwoerful, and tries to employ a secret weapon that will banish her soul to the point where she won't be able to reincarnate anymore. Ellie and Will work together to foil the reaper's plot, while trying to train Ellie and maintain her human life at the same time.

Some things I liked: Unlike Hush, Hush, the heroine is actually an active force in the book. Ellie is really powerful, more than she even realizes, so she can take care of herself, to the point of beating up Will the odd time when she gets out of hand. Also, Will wasn't a complete ass like Patch is in Hush, Hush; yes he's stoic and removed a little bit, but not to the point where he's detestable. Their relationship together is handled really well, it's taken slowly and things get a little angsty, but Will and Ellie interact well together and make a really good team throughout the novel. Complete opposite of the relationship in Hush, Hush. This is a debut novel, and the writing reflects that at points, but I'm sure it will improve with future installments (this is the first of a planned trilogy).

All in all, this is probably one of the better fallen angel type books I've read, which granted I haven't read a ton of them, but it's definitely the best one I've read yet. The plot is standard but the characters are quite likable, and the romance is cute, plus Ellie is admirable as the heroine, very human with faults but strong at the same time.

Recommendation:
If you're in the mood for a fallen angel type story but weren't nuts about Hush, Hush, read Angelfire, if you're anything like me, you'll find it more entertaining and less objectionable than the former.

Thoughts on the cover:
Eh, it's okay. The author's website has some awesome character concept art that's absolutely beautiful, so look at those instead.
Posted by Andrea at 5:09 PM