The Hunt of the Unicorn - C.C. Humphreys 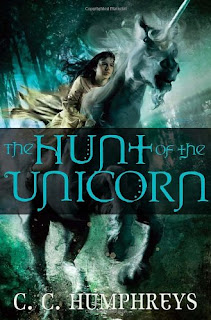 Summary:
From the inside cover:
Elayne thinks the old family story that one of her ancestors stepped through a tapestry into a world of mythical beasts makes a great fireside tale. But she lives in the real world. In New York City. And she's outgrown that kind of fantasy.
Until she finds herself in front of a unicorn tapestry at the Cloisters museum and sees her initials woven into the fabric. And hears a unicorn calling to her. And slips and falls—into that other world.
Suddenly the line between fantasy and reality isn't so clear. But the danger is real enough. Almost before she can think, Elayne is attacked by a ferocious beast, rescued by a unicorn, and taken prisoner by a tyrant king. Each of them seems to have an idea about her—that she's a hero, a villain, dinner!
But Elayne has a few ideas of her own. She wants to overthrow the king; she wants to tame the unicorn. She wants to go home! And she's willing to become both hero and villain to do it.

Review:
The Hunt of the Unicorn takes a typical fantasy story and gives it a bit of unique spin. However, despite the cool premise and the plethora of medieval monsters and creatures, some horrible dialogue and slightly flat characters made it another one of those YA books with so much potential that it just about makes you cry when you realize that the end result just didn't wow you.

The Hunt of the Unicorn, besides being a slightly awkward title in my opinion...makes me think it should be just The Unicorn Hunt, starts off really well. We meet Alice-Elayne, who goes just by Elayne, as her dad is about to go into the hospital for cancer treatment. Before he leaves, he asks his daughter to read from their family history, a story written by the first of many girls named Alice-Elayne (kind of an unfortunate name to be saddled with). Elayne reads about their first ancestor, who grew up in a parallel world called Goloth, or the Land of Fabulous Beasts since it's crawling with griffins, manticores, cockatrices, and unicorns, among others. When threatened, the original Alice-Elayne escapes through a tapestry into the world as we know it (but the medieval version) with the help of a unicorn named Moonspill. Alice-Elayne promises if Moonspill ever needs help, either herself or her future generations will answer the call. When present-day Elayne goes on a field trip to the Cloisters museum the next day, the tapestries call out to her. Using the unicorn's horn passed to her from her father (and from generations before that), she steps through the tapestry to Goloth and meets Moonspill and discovers that he needs her help to overthrow the present king and reunite with his mate. But when Elayne comes into the company of the king, called Leo, will her mission be jeopardized?

I loved the premise with the generations waiting to repay the favour, the parallel worlds, and all the creatures. What really bugged me was the dialogue. Sometimes the characters would speak in a way that sounded out of character, like Elayne's dad talking very properly and formally; sometimes the dialogue sounded forced, like when Elayne would bring out the slang-y teen speak. And other times a character would switch between different ways of speaking, like when Elayne would switch randomly between ye olde English and modern speech, it was really annoying and awkward. The characters weren't really well developed, you felt for them on the surface but didn't bond with them. That, and Elayne wasn't really a strong character...she does a lot of waiting around. I get that she's only 15 and literally thrown into the situation, but c'mon girl, grow a spine! She does get better towards the end, but it still bugged me.

Thoughts on the cover:
I like the colour scheme, but the position of Elayne and Moonspill seems at a bit of an odd angle, Moonspill looks just weird.
Posted by Andrea at 5:03 PM