The Girl Who Circumnavigated Fairyland in a Ship of Her Own Making - Catherynne M. Valente 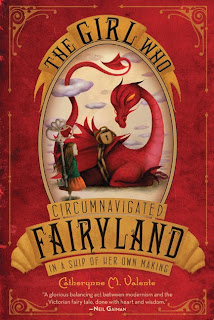 Summary:
From the publisher's website:
Twelve-year-old September lives in Omaha, and used to have an ordinary life, until her father went to war and her mother went to work. One day, September is met at her kitchen window by a Green Wind (taking the form of a gentleman in a green jacket), who invites her on an adventure, implying that her help is needed in Fairyland. The new Marquess is unpredictable and fickle, and also not much older than September. Only September can retrieve a talisman the Marquess wants from the enchanted woods, and if she doesn’t . . . then the Marquess will make life impossible for the inhabitants of Fairyland. September is already making new friends, including a book-loving Wyvern and a mysterious boy named Saturday.

With exquisite illustrations by acclaimed artist Ana Juan, Fairyland lives up to the sensation it created when the author first posted it online. For readers of all ages who love the charm of Alice in Wonderland and the soul of The Golden Compass, here is a reading experience unto itself: unforgettable, and so very beautiful.

Review:
After reading glowing reviews from fellow bloggers (and receiving some impeccable perfect scores), plus being the recipient of the Andre Norton award for its category, I knew I had to test this baby out for myself to see if the hype was well-deserved. And hoo boy, is it ever! There are no words that can describe how magical and charming this novel is, and how blown away I was by it, but I'll sure as heck try.

September is 12 years old and living in Omaha, Nebraska in a time period echoing back to WWI-WWII. The Green Wind comes to her and beckons her to Fairyland, where she agrees to steal back a spoon from the evil Marquess and then ends up doing a task for the Marquess in order to save her own head. Along the way, September meets a variety of colourful characters and travels the furthest parts of Fairyland for her quest. As with all stories like this, it's a coming of age story where the child character goes through considerable growth illustrated through their journey, and this one is no exception. September is valiant, plucky, likable child that is loyal to the friends she makes in Fairyland, and has no problem standing up for herself (as much as you would expect a 12-year-old to do so in Fairyland). The supporting characters are equally charming: A-through-L, a wyvern whose father is a library (officially making him a Wyverary); a Marid named Saturday that eats stone and salt, plus the plethora of other characters that the group encounters in each chapter.

The novel is a subversive one written in an old fashioned, lyrical style highly reminiscent of Alice in Wonderland, The Wizard of Oz, and traditional British children's stories in general. The language and vocabulary the author uses isn't dumbed down in any way despite being written for a modern audience, so I would give it to slightly older kids and teenagers (10+) that are more likely to understand the language, unless you have younger children with some seriously advanced vocabulary. I love how the novel incorporates traditional fairy tale elements but still manages to make them unique without destroying their charm like so many urban fantasy type books do today. Again, I can't get over how utterly charming this book is, the author gets the formula dead-on that makes for a magnificent story. This is one of those special books that remains with a person for a long time, that evoke memories of being read to in front of a fireplace in winter, or the one thing that made you feel better when you were sick (The Princess Bride was always my go-to book whenever I was under the weather for those reasons). This is a book that will wait on our bookshelf until our kids are old enough to have it read to them, that I will buy and put away to give to my friend's toddlers in a few years time when they're older, that I'll give to my book-loving nephews, and I'll do as a read-aloud the next time I teach in a junior level class as school. The author has the first 8 or so chapters posted on her website (the entire novel was available as a free ebook until the rights were bought by the publisher about a year ago), so please feel free to check it out to get a feel for the atmosphere and the language, I can guarantee you'll be hooked.

Recommendation:
Stunning. Beautiful, lyrical, charming, and so many other adjectives that I could name. Everyone I've encountered who has read this has been mesmerized by it, and so will you. Adults and kids will adore this, plus it just smacks of the type of wonderful book to read aloud to your kids at bedtime. Read this, just trust me on this one.

Thoughts on the cover:
I am so glad this book has illustrations throughout it. The pictures add to the whimsy and help the story along without giving anything away. The cover image is a modified version of one that appears in the book, except in beautiful colour. I like the choice of image too, of September and the Wyverary, plus the red tones on the cover just look gorgeous.
Posted by Andrea at 5:48 PM