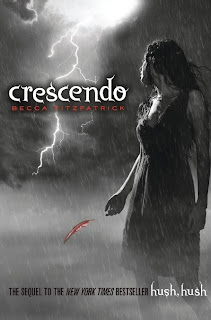 Summary:
From the author's website:
Nora should have known her life was far from perfect. Despite starting a relationship with her guardian angel, Patch (who, title aside, can be described as anything but angelic), and surviving an attempt on her life, things are not looking up. Patch is starting to pull away and Nora can't figure out if it's for her best interest or if his interest has shifted to her arch-enemy, Marcie Millar. Not to mention that Nora is haunted by images of her father and she becomes obsessed with finding out what really happened to him that night he left for Portland and never came home.

The further Nora delves into the mystery of her father's death, the more she comes to question if her Nephilim bloodline has something to do with it as well as why she seems to be in danger more than the average girl. Since Patch isn't answering her questions and seems to be standing in her way, she has to start finding the answers on her own. Relying too heavily on the fact that she has a guardian angel puts Nora at risk again and again. But can she really count on Patch or is he hiding secrets darker than she can even imagine?

Review:
Ah Hush, Hush. Everyone loved it and drooled over the concept of bad boy fallen angels last year when it came out. I had issues with the relationship in Hush, Hush; but those issues are resolved by the time Crescendo starts, so I started the book with an open mind. Crescendo begins with Patch acting as Nora's guardian angel after saving her life in the previous book. Things start to turn south for Nora though: she starts summer school, is realizing how much she really needs a car, is forced to be her rival Marcie Miller's lab partner, and comes to terms about her relationship with Patch. Without giving too much of the plot away, Nora acts like a complete moron, even though Patch is very clear about why he has to do certain things (and even when he isn't it's pretty obvious he's wrapped up in angel politics and can't give her a clear-cut answer). I felt like smacking Nora upside the head (much like in the previous book), thinking "why would you rush head on into what's clearly something beyond your control (aka angel stuff) without asking Patch for information/help?" Even though she doesn't trust Patch, there wasn't enough built-up against Patch's character where Nora is concerned, so the reader knows he would never hurt her, hence the frustration with Nora. So as far as the plot is concerned, Nora causes a lot of her own problems, but I've just come to the realization that that's Nora and we're stuck with her as a heroine so I'd better get used to her. I find myself liking Patch more despite his choice in girlfriends, he's such a great bad boy character.

The plot of the book flowed along much better than in Hush, Hush due to all the subplots. There's the interactions with Marcie Miller, who's so wonderfully mean you love to hate her, as well as the development about what happened to Nora's father and the discovery of the Black Hand. Once the plot focuses less heavily on Nora and Patch's relationship and more about everything else that's going on it gets more enjoyable, at least from my perspective. In this area I liked Crescendo more than Hush, Hush. The writing still good, same as before, I would love to see the author write more books on a different subject matter.

All in all, I liked Crescendo more than Hush, Hush purely because the focus was shared between the relationship and other subplots. Things are really starting to heat up, and it's really peaking my interest. If it weren't for my frustrations with Nora, I'd probably like it a lot more, but readers that don't share my issues in that area will definitely enjoy this book, probably even more than Hush, Hush.

Recommendation:
Crescendo comes out Oct. 19 2010, so if you liked Hush, Hush (or even had issues with it, like me), be sure to give it a try. No matter what you thought of the first installment, I anticipate readers will like Crescendo even more.

Thoughts on the cover:
It's not as striking as the cover of Hush, Hush, but still quite beautiful. The grey-scale image of Nora standing in the rain letting go of a blood-red feather (presumably one of Patch's from the previous cover) is a nice touch, and kudos to keeping in theme with the cover from Hush, Hush.
Posted by Andrea at 4:45 PM