The Girl Who Was On Fire - Leah Wilson 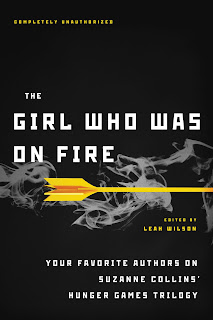 Summary:
From Amazon.ca:
Katniss Everdeen’s adventures may have come to an end, but her story continues to blaze in the hearts of millions worldwide.

In The Girl Who Was on Fire, thirteen YA authors take you back to Panem with moving, dark, and funny pieces on Katniss, the Games, Gale and Peeta, reality TV, survival, and more. From the trilogy's darker themes of violence and social control to fashion and weaponry, the collection's exploration of the Hunger Games reveals exactly how rich, and how perilous, protagonist Katniss’ world really is.

• How does the way the Games affect the brain explain Haymitch’s drinking, Annie’s distraction, and Wiress’ speech problems?
• What does the rebellion have in common with the War on Terror?
• Why isn’t the answer to “Peeta or Gale?” as interesting as the question itself?
• What should Panem have learned from the fates of other hedonistic societies throughout history&mdashand what can we?

The Girl Who Was On Fire covers all three books in the Hunger Games trilogy.

Review:
This has been on my to-read list since I saw it advertised in Shelf Awareness a few months back. Apparently this publisher has put out a few of these type of books with essays on popular children's and young adult series written by other authors, but this is my first foray into it.

There are 13 essays in this collection on practically every in-depth aspect of the Hunger Games trilogy you can think of. There are essays on Team Katniss (Hunger Games fans know what this is), love as a political weapon, reality versus unreality, why the trilogy is so popular, surveillance in the series, and the reality television aspect, among others. The various YA authors, among them Sarah Rees Brennan and Carrie Ryan, present some very well written pieces here, although some of the essays are more effective than others purely because of the topics presented. Some of the essays weren't as insightful as I was hoping, like the ones on surveillance, reality versus unreality, and the science fiction elements being closer to reality than we think; but I think that's just because those are some of the base themes that anyone who's read all three books and given some depth of thought to them would realize, hence my reaction of "yeah, I already got that" when I read those particular essays, but there are plenty of others that will stop and make you reconsider things about the series you thought you understood.

My favourite essays were: Team Katniss by Jennifer Lynn Barnes, Your Heart is a Weapon the Size of Your Fist by Mary Borsellino, Panem et Circenses by Carrie Ryan; Bent, Shattered, and Mended by Blythe Woolston, and The Inevitable Decline of Decadence by Adrienne Kress. The collection greatly surprised me in that all the essays were quite well written and put-together (I would actually use some of these as examples of well-written essays in a classroom, especially for writing introductions and conclusions), so the favourites of mine are purely because of the topics presented. This collection covers all three books in the trilogy, and sometimes an author will reference all three books in one essay, so it is essential that someone reading these essays be familiar with all three books. The authors do paraphrase events in the book when they are brought up in the essays, but not necessarily in enough depth for someone who hasn't read the books to understand.

Recommendation:
A must read for anyone who's a Hunger Games fan. All well-written pieces, but some topics will impress you more than others.

Thoughts on the cover:
I like how this one resembles the first Hunger Games cover: the black and yellow colour scheme, the font (though the smoke is a nice added touch). The arrow across the cover is a nice choice of image rather than the Mockingjay since it represents Katniss just as well, plus the Mockingjay is kind of overused.
Posted by Andrea at 6:09 PM