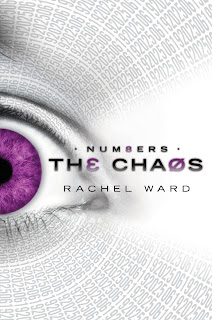 Summary:
From the inside cover:
When he was just a little boy, Adam learned about the numbers. The first ones he saw were Jem's. That was how he knew she was going to die. Adam inherited his mother's curse. With a vengeance. When he stares into someone's eyes, he not only sees the date of their death, he feels the searing, shocking pain of it.

Orphaned, Adam has grown up by the sea with his great-grandmother, Val. But as rising tides flood the coast, they flee to London. The city is an alien, anarchic place. Most disturbing of all, Adam can't help but clock how many people's numbers are in January 2027; how many are on New Year's Day.

What chaos awaits the world? Can Adam and his damaged friend Sarah stop a catastrophe? Or are they, too, counted among the "twenty sevens"?

Review:
After reading the first Numbers book last summer, I knew I had to pick up the sequel once it came out here.

The Chaos picks up years after the events at the end of Numbers: Jem and Spider's teenaged son Adam has inherited Jem's ability to see the dates of people's deaths in his head, in addition to seeing and feeling the pain and circumstances surrounding their death. With Spider long dead, and Jem having passed away when Adam was only 8 (a death he foresaw and even told his mother about), Adam is raised by Spider's grandmother, Val. In 2026, global warming and climate change has decimated much of England's coastline, forcing Adam and Val to move from the seaside to London, exactly where Jem didn't want her son to be. Adam notices a lot of people's numbers are the same: January 1, 2027. Like his mother before him, he notices there's something up with the numbers and knows some cataclysmic event will occur. Adam struggles with the decision to either listen to his mother and save himself and never tell anyone about his ability and what he knows, or to try and save people by trying to warn them about what lies ahead. Plus there's Sarah, who doesn't see the numbers but has visions of the catastrophe that will befall London on New Years Day, 2027. After being raped and impregnated by her father, Sarah's only concern is to keep her newborn daughter away from the family that failed to protect her, which is almost impossible to do in London's high security society.

The Chaos didn't impress me as much as Numbers did. The plots are similar: the teen who can foresee something that's going to kill a lot of people and deciding what they want to do about it. I liked Adam's and Sarah's stories on their own, but when the two intersected it just didn't have the same effect as when Jem and Spider came together in Numbers. The Chaos still has that same writing style and pacing that makes it a wonderful thriller, but the characters really made the first one, and they didn't quite deliver in the same way as the first. That being said, I loved both Adam and Sarah, the author did an especially good job capturing Sarah's feelings towards her pregnancy and her baby Mia, Sarah's story was particularly powerful.

Recommendation:
Not as amazing as the first one, but still pretty good.

Thoughts on the cover:
Not as horrendous as the first one, or maybe I'm just used to the freaky eyeball, but I'm sure the position of the eye is more appealing this time.
Posted by Andrea at 3:17 PM