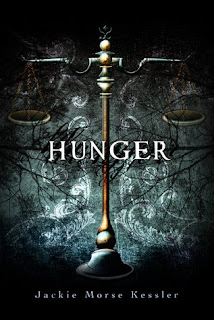 Summary:
From the back of the book:
Lisabeth Lewis has a black steed, a set of scales, and a new job: she’s been appointed Famine. How will an anorexic seventeen-year-old girl from the suburbs fare as one of the Four Horsemen of the Apocalypse?

Traveling the world on her steed gives Lisa freedom from her troubles at home: her constant battle with hunger, and her struggle to hide it from the people who care about her. But being Famine forces her to go places where hunger is a painful part of everyday life, and to face the horrifying effects of her phenomenal power. Can Lisa find a way to harness that power — and the courage to battle her own inner demons?

Review:
Apparently the Four Horsemen of the Apocalypse are alive and well, some of them not technically alive, and when they die, they choose replacements. Lisabeth Lewis, anorexic and damaged, is chosen by Death, who apparently looks like Kurt Cobain, to be the next Famine. The author uses a bit of the paranormal (and what's better than the Four Horsemen, really?) to follow Lisa and her growth from suffering anorexic to girl in recovery.

I really liked the Four Horsemen aspect: the personalities and depictions of Death, War, and Pestilence were bang on for their characters; and although Death can appear as whatever he wants, having the author describe him as Kurt Cobain is pure awesomeness. I wish the author had elaborated on the Four Horsemen part a little bit and why they choose the people they do, since they kind of get dropped on the reader in a "Huh? Horsemen? They recruit people?" kind of way. That I think was the only real detriment for me, the lack of some background on the Horsemen (at least this author's vision of them).

The author herself suffered from an eating disorder, so the depiction of the illness itself is really well done and very authentic, with the Thin Voice that invades Lisa's consciousness and can't help listing the calories for every single food she comes across. It's powerful in that Lisa witnesses the consequences of famine around the world in her role as Famine, and that leads to her accepting that she has a problem and that with all the food available to her, she chooses to starve herself, and she realizes she wants to change that and make a decision to live again. I've read better YA books dealing with eating disorders, but this one is still well done.

Recommendation:
Definitely give this one a read, but don't get too frustrated with the lack of background info on the Horsemen and how they operate. There's a second book in this series already out as well (Rage, dealing with the person chosen as War), so I'll be picking that one up eventually as well.

Thoughts on the cover:
Shiny cover = good. I also like the focus on the implement of the Horsemen, in this case, the balance scales. The background image and design behind the scales is very nice too.
Posted by Andrea at 6:24 PM